The negative momentum in the MACD that returned below its signal line shifts the spotlight to the 0.8300 level. Yet, the RSI and the Stochastics suggest that selling pressure may ease before the pair heads lower as the indicators are already fluctuating in overbought territory.

An upside correction in the price should continue above 0.8470 and more importantly beyond the 20-day simple moving average (SMA) that has been quite restrictive recently to increase buying confidence. Then, the rally could get new legs if the price manages to top above the 0.8600-0.8655 congested area, with resistance probably arising next near the 0.8720 level and then around 0.8800.

Alternatively, an extension beneath the 0.8300 strong support region would likely find some footing near 0.8160. If the latter proves an easy obstacle to overcome, then the 0.8100 handle could next take control.

Regarding the medium-term picture, the pair maintains a bearish profile as it keeps stretching the downtrend off the 10-year high of 0.9323. A decisive close above 0.8655 would eliminate downside risks, shifting the outlook to a neutral one.

Summarizing, EURGBP is facing a negative bias in the short-term, though a rebound in the price cannot be ruled out. In the medium-term window, the bearish outlook is well intact and only a climb above 0.8655 would adjust it to a neutral one. 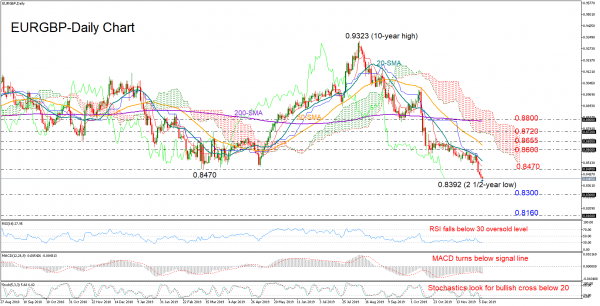