Germany 30 Index (Cash) bounced off the 50-period simple moving average (SMA) yesterday, which resulted in a pickup in positive momentum and four successive positive sessions to retest the twenty-three-month high of 13,548.

The short-term oscillators suggest that positive directional momentum is strengthening. The MACD, remained above zero, and is increasing over its red trigger line, while the RSI is rising in bullish territory. Moreover, the ADX reflects a strong positive trend in place, also aided by the uptrend line drawn from August 2019 and the upward sloping SMAs.

Overall, the very short-term is neutral-to-bullish with a close above 13,600 reviving the bigger positive picture. 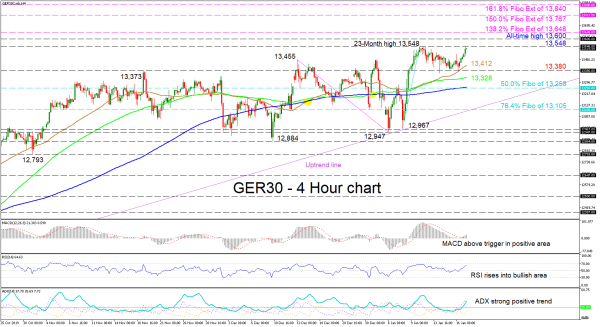