NZDJPY is testing the bottom of the 71.22-69.90 range, which is likely to collapse as the RSI has restored negative momentum in the bearish area and the 20-day simple moving average (SMA) is heading for a bearish cross with the 200-day SMA.

The 50% Fibonacci is also in the neighborhood making any violation of the barrier important for the sell-off to extend towards the 61.8% Fibonacci of 69.00, while lower, traders could also look for support around 68.50.

Meanwhile in the medium-term picture, the positive outlook has faded following the close below the ascending trendline. A potential bearish cross between the 20- and the 200-day SMAs could further deteriorate the sentiment.

In brief, NZDJPY is likely to break its range bound trading and experience additional losses in the short-term. Such an event could further downgrade the outlook in the medium-term timeframe. 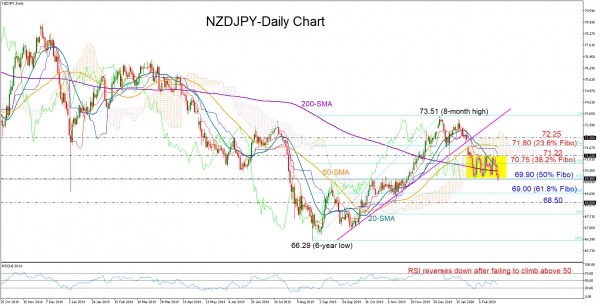 Currencies: Did The Dollar Enter A Sell-On-Upticks Pattern?