Weaker than expected US data released on Friday sent the greenback down across the board, with the EUR/USD pair ending Friday at 1.1469, not far from a fresh yearly high of 1.1489 set last week. US inflation for June came in flat, disappointing for a fourth consecutive month, up by 1.6% from a year earlier. Core CPI YoY resulted at 1.7% the lowest in over two years. Retail Sales also came below market’s expectations, falling 0.2% in June, down for a second consecutive month, while consumer confidence, according to the Michigan index, fell down to 93.1 for July against previous 95.1.

The Fed is still in the path of rising rates for a third time this year and shrinking its balance sheet, according to Yellen’s semi-annual testimony before the Congress, but she also said that not much more hikes are required to reach "normal." The figures released on Friday may it tougher for the central bank to continue with its tightening policy, while for the ECB, expectations built for QE tapering, with the market expecting some sort of announcement in the September meeting, not the one that will take place this upcoming week. Divergences on economic policies between the two institutions are beginning to dwindle, but still present, preventing the pair for breaking higher.

From a technical point of view the pair retains a bullish bias, albeit still unable to clearly surpass the current 1.1460 region, from where the pair retreated multiple times since January 2015. In the daily chart, technical indicators resumed their advances within positive territory after correcting overbought conditions, whilst the 20 DMA heads below the current level and around a daily ascendant trend line coming from June 28th, all of which favors additional advances. In the 4 hours chart, the price settled above its 20 SMA, whilst technical indicators advanced above their mid-lines, also supporting additional gains on a break above 1.1490, the yearly low and immediate resistance. 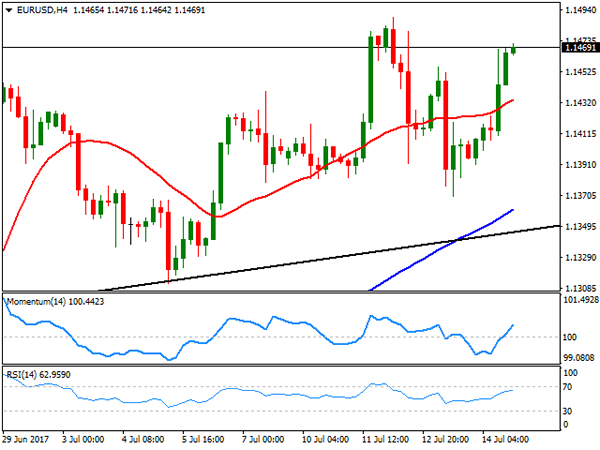 The USD/JPY pair closed the week at 112.53, down on broad dollar’s weakness, as the DXY sunk to fresh YTD lows on softer-than-expected US inflation figures. The pair traded as low as 112.26, bouncing modestly ahead of the close as US Treasury yields recovered some ground ahead of the closing bell. The 10-year note benchmark fell to 2.29% after settling at 2.32%, still down from previous 2.35%, while the 2-year note yields, the most sensitive to rate moves, fell to its lowest in three weeks. Japan will start the week with a bank holiday, which may result in limited action at the beginning of the week, whilst the BOJ will have its monetary policy meeting on Thursday. Governor Kuroda is not expected to surprise markets, reaffirming the need to maintain easing to achieve a sustainable 2% inflation. Anyway, the pair is a brick of breaking lower, as in the daily chart the price broke below its 200 DMA, while standing barely above the 38.2% retracement of its latest weekly advance, at 112.30. Technical indicators in the same chart have turned strongly lower and are about to cross their mid-lines into negative territory, suggesting that a downward move through the mentioned Fibonacci support should lead to additional losses. In the 4 hours chart, the price settled below the 100 SMA for the first time since mid June, while technical indicators have lost their bearish strength, but remain within negative territory, in line with the longer term perspective. 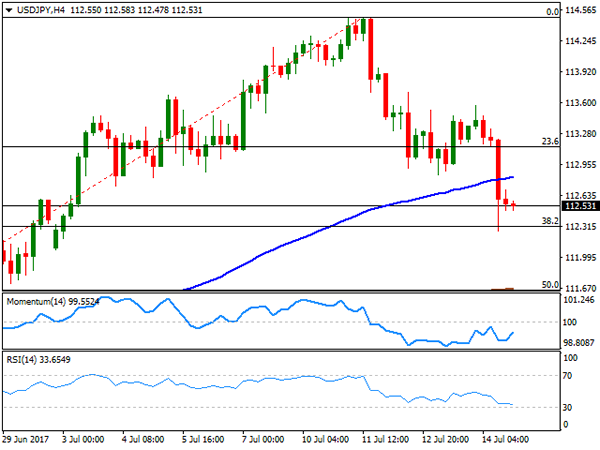 The GBP/USD pair broke higher and settled around 1.3100, its highest since September last year, as hopes for a softer Brexit kept the Pound bid during the second half of the week, with the rally later fueled by USD weakness. PM Theresa May have asked opposition Labour for support with the Brexit, and news last week showed that she is considering setting up a cross-party Brexit commission, which somehow backed the case for a more EU friendly Brexit. The pair tripped stops above previous 2017 high on US weak data, topping on Friday at 1.3113. Next Tuesday, the UK will release its June employment figures, expected to remain close to 3%, but hopes of a rate hike cooled down on poor local data, putting the BOE on a tough position ahead of their next monetary policy meeting. In the meantime, the daily chart shows that the Momentum remains above its 100 level with limited upward strength, but also that the RSI indicator heads sharply higher at 67 as the 20 SMA advanced below the current level, in line with additional gains for this Monday. In the 4 hours chart, technical indicators have eased partially, but remain within extreme overbought levels, while the price stands far above its moving averages. 1.3047, the previous yearly high is the immediate support, and as long as it holds, the risk will remain towards the upside. 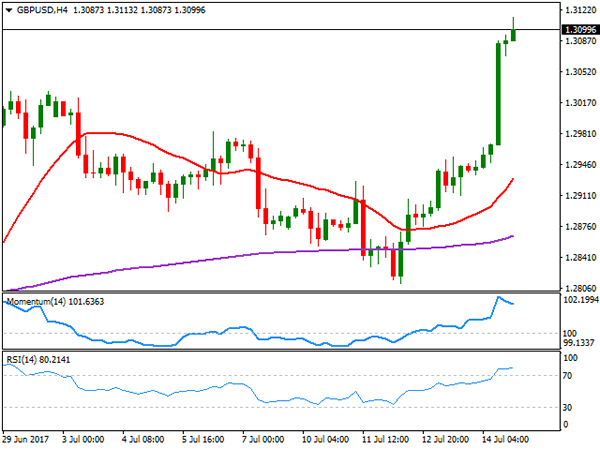 Gold prices recovered strongly on Friday, ending the week up on poor US data that cooled down expectations of firm tightening in local monetary policy. Spot gold settled at $1,228.23 a troy ounce, recovering from a 4-month low of 1,204.75 set at the beginning of the past week. The recovery took off some of the downward pressure over the bright metal, but it´s still not enough to confirm an interim bottom ahead of further recoveries, as in the daily chart, selling interest rejected the advance around a bearish 20 DMA, at 1,232.80, while technical indicators barely managed to recover some ground, still well below their mid-lines. Shorter term, and according to the 4 hours chart, the upward potential also seems limited, as spot was unable to surpass a strongly bearish 100 SMA, whilst technical indicators turned lower within positive territory. In this last time frame, the 20 SMA provides a dynamic support at 1,220.70, with a break below it favoring a bearish extension for this Monday.

Crude oil prices recovered ground this past week, and West Texas Intermediate futures settled at $46.67 a barrel, up 5.2%. A broadly weaker dollar helped the commodity advance, as fears over an oversupply market persist, as the Baker Hughes report released on Friday showed that the number of active US rigs drilling for oil increased by 2 to 765. Backing the commodity were news indicating supply issues in Nigeria, with a pipeline shutdown. Daily basis, WTI presents a modest positive tone, with the price above its 20 SMA, the Momentum indicator lacking directional strength, but within positive territory, and the RSI indicator heading north around 57. In the same chart, however, the 100 DMA heads lower around the 61.8% retracement of the latest daily fall around 48.20, while the commodity topped around the 50% retracement of the same slide in the precious week around 47.20, prize zones where selling interest will likely appear. In the 4 hours chart, the upside is favored, with technical indicators heading higher within positive territory and the 20 SMA having surpassed its 100 and 200 SMAs below the current level. 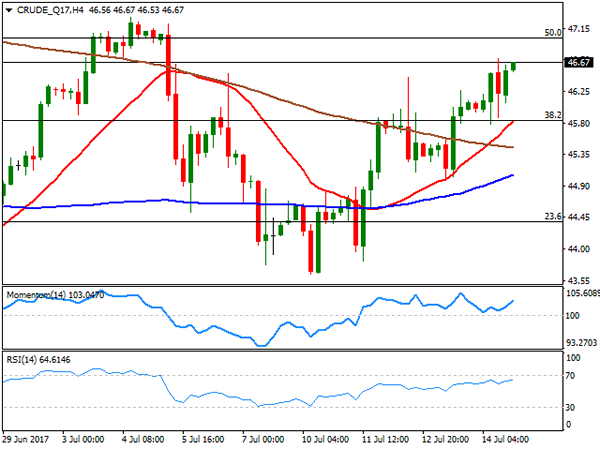 Wall Street surged to record highs on Friday, boosted by poor US data on speculation that it will force the Fed to ease its tightening bias. The Dow Jones Industrial Average and the S&P settled at record highs, with the first up 84 points to 21,637.74 and the second adding 0.47% to 2,459.27. The Nasdaq Composite added 11 points, to close the day at 2,459.27. Financial equities were the worst performers in the country, on earning reports. JPMorgan reported much better-than-expected second quarter earnings, but the bank lowered its net interest income forecast for the year, while Wells Fargo also beat on earnings, but revenues were below expectations. Finally, Citigroup also reported good results for Q2, but the bank reported a slowdown in its trading results. Within the DJIA JP Morgan was the worst performer, down 0.91%, while Wal-Mart led advancers, up 1.72%. Technically, the Dow daily chart shows that the index settled far above all of its moving averages, with the RSI indicator heading north around 67, and the Momentum lacking directional strength within positive territory. In the 4 hours chart, technical indicators eased modestly within overbought territory, whilst the 20 SMA surged above the largest, acting as dynamic support some 100 points below the current level. The index traded as high as 21,682 intraday, the immediate resistance and the level to break to open doors for an extension towards 22,000 this upcoming week. 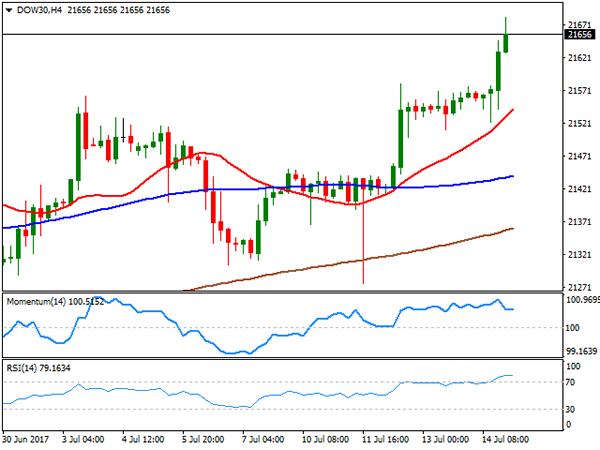 The FTSE 100 closed at 7,378.39, down 0.47% or 34 points last Friday, despite the strong performance of mining-related equities, as a resurgent Pound weighed on its export-oriented components. Anglo American was the best performer, adding 2.10%, while Fresnillo and Randgold Resources added over 1%each, also making it to the top ten list. Barratt Developments led decliners with a 2.50% loss, followed by Royal Mail that shed 2.43%, after presenting a new pension proposal, while the company with a "sell" rating. Technical readings in the daily chart favor the downside, as the index settled a few points below a bearish 20 DMA, whilst technical indicators resumed their declines after failing to surpass their mid-lines. In the 4 hours chart, the index is below its 100 and 200 SMAs and around a bullish 20 SMA, whilst technical indicators hover within positive territory, without clear directional strength, failing to provide directional clues. 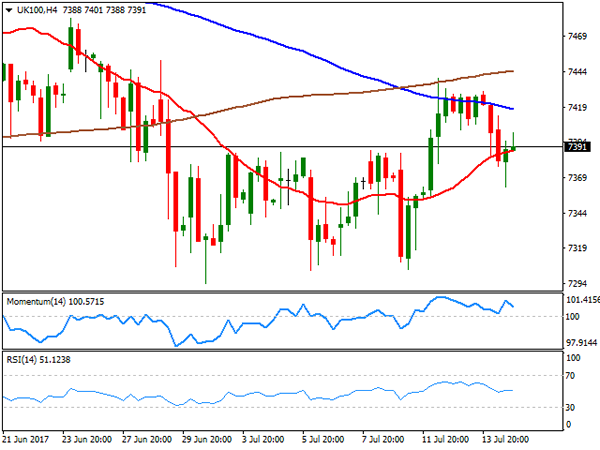 The German DAX closed 9 points or 0.08% lower on Friday at 12,631.72, as European equities were weighed down by the poor performance of the banking sector, hit my earning reports from their overseas counterparts. In Germany, Commerzbank led decliners with a 1.10% lost, followed by Bayerische Motoren that shed 1.06%. Volkswagen led advancers, up 1.08%, followed by BASF that added 0.92%. The pharmaceutical sector advanced, which helped limiting losses. Despite Friday’s slide, the index closed sharply up for the week, but presents a neutral stance according to technical readings, given that in the daily chart, the index stands a few points above a modestly bearish 20 DMA, while technical indicators hold flat around their mid-lines. In the 4 hours chart, the 20 SMA heads sharply higher below the current level, but the index continues hovering around directionless 100 and 200 SMAs, whilst technical indicators lack directional strength, but hold well above their mid-lines. The index topped last week at 12,677, now the immediate resistance and the level to break to see further gains during the upcoming sessions. 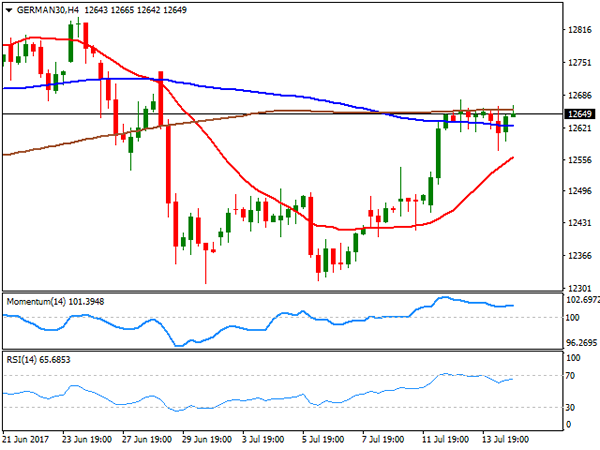