CADJPY is currently trading around the 76.36 level, that being the 23.6% Fibonacci retracement of the down leg from 84.73 to 73.78. The price action, although finding some footing from the 75.96 low for upside corrections, is capped by the mid-Bollinger band. That said, aiding the negative picture are the declining 50- and 100-day simple moving averages (SMAs) and the recent bearish crossover of the 200-day SMA by the 100-day one.

Furthermore, the short-term oscillators suggest negative momentum is picking up again. In the negative region, the MACD’s push above its red trigger line looks to be failing, while the RSI is fading below its neutral mark. Likewise, the stochastics are confirming a southward move as they head towards the oversold territory.

Clearly steering below the 75.96 level could send the price towards the lower Bollinger band located at the 74.36 support from June of 2012. If selling interest persists and conquers the recent multi-year low of 73.78, the 73.49 obstacle from November 2011 could challenge the bears’ efforts to dive towards the 72.14 barrier from October of 2011.

Summarizing, the short-term bias remains bearish below the 78.46 barrier, and either a break above 78.46 or below 75.96 could reveal the near-term direction. 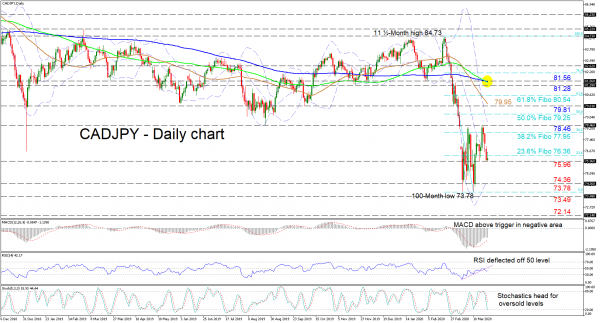