GBP/USD slipped in early trading on Friday, after UK Final Services PMI missed analyst expectations, coming in at 34.5. The pound fell sharply against the dollar from March 10th as investors sought the greenback for its liquidity and safe haven status amid the coronavirus pandemic. Sterling rebounded on March 20th, after the Federal Reserve had cut interest rates to a range of 0.00% to 0.25% and restarted quantitative easing with the purchase of $500 billion in treasuries and $200 billion in mortgage-backed securities on March 15th.

The market remains focused on the relentless coronavirus and its economic impact, with risk-off sentiment prevailing. According to data from Johns Hopkins University, coronavirus COVID-19 global cases have risen to 1,018,948 with 53,211 fatalities.

On Thursday, the US jobless claims figure came in at 6.6 million for the week ending March 28, missing analyst expectations of 3.5 million and rising from 3.3 million in the prior week. Nobel laureate Paul Krugman did not mince his words in a New York Times opinion piece: “Over a normal two-week period we’d expect around half a million U.S. workers to file claims for unemployment insurance. Over the past two weeks we’ve seen almost 10 million filings. We’re facing an incredible economic catastrophe.”

The US dollar would normally be pressured by such negative news on the domestic economy. However, in these unprecedented times investors again sought the greenback for its haven appeal. The market now looks to Friday’s US employment report. Analysts are expecting a drop of just 100K in nonfarm payrolls, but this is because the data only runs up to March 14th.

Looking at the GBP/USD daily chart we can see that a bearish ‘death cross’ (50 period simple moving average crossing below the 200 period moving average) is poised to form. The 200 period SMA represents resistance above, currently at 1.2650. Potential support lies below at the 38% retracement level of 1.2066 and the 50% retracement level of 1.1940. 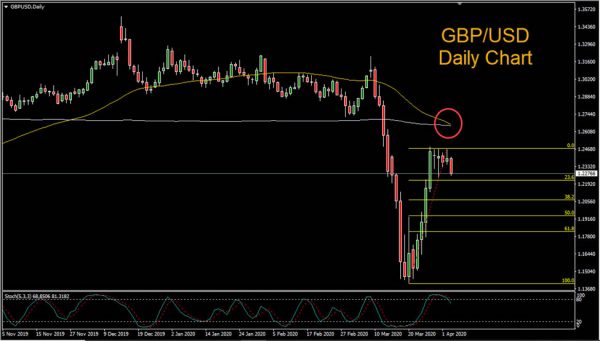