AUDUSD nicely landed on the 20-day simple moving average (SMA) following its pullback from a peak of 0.6569 on April 30.

Despite the latest downside reversal, the main trend remains up in the short-term picture, with the price set to confirm another higher low at 0.6371 and head north again if the bulls manage to close above the nearby 0.6450 resistance, which is the 61.8% Fibonacci retracement level of the bearish wave from the 0.7031 top. The bullish cross between the 20- and 50-day SMAs is also endorsing the upside direction.

Otherwise, a decline below the 20-day SMA could add more legs to the sell-off, shifting all eyes to the previous low of 0.6252. The 50-day SMA, the 50% Fibonacci, and the blue Kijin-sen line are all positioned in the neighborhood, too, giving extra importance to the region. Violating that block, the pair could directly meet the 38.2% Fibonacci of 0.6080 if the 0.6200 level fails to provide support, eliminating hopes of an upward-trending market too.

Summarizing, AUDUSD is expected to recoup recent losses if it successfully breaches the nearby 0.6450 resistance. Should the pair retreat below the 20-day SMA, it could come under renewed pressure. 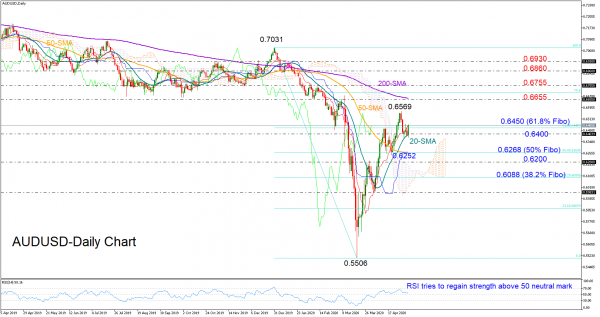