EURUSD was again unable to close above the 1.0980 hurdle last week despite touching the 200-day simple average (SMA), with the price pulling back into the 1.0800 territory on Monday.

Otherwise, while the RSI and the MACD are currently not in favor of upside corrections, as the indicators are decelerating after barely entering the bullish area, a bounce above 1.0890 (and a higher low) may push for a close above the 1.0950-1.0980 resistance zone. In case efforts prove successful this time, the 200-day SMA and the 23.6% Fibonacci of 1.1025 should give way for the pair to improve towards the downward-sloping trendline from the 1.1411 peak.

Meanwhile in the medium-term picture, a directional move could come either above 1.1495 or below 1.0635.

In brief, EURUSD is expected to keep erasing gains in the short-term if it successfully breaches its shorter-term SMAs, with the 1.0830 level coming next to the rescue. 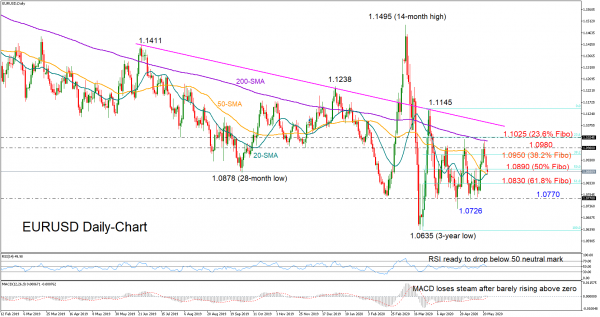