Gold prices are continuing the upside movement, creating new highs and touching an almost eight-year peak at 1,779. The short-term technical indicators are neutral-to-bullish and point to a somewhat stromger market.

The MACD is holding well above its zero and trigger lines, while the RSI is hovering in positive territory. The Ichimoku lines are also suggesting a bullish bias as the red Tenkan-sen line is standing above the blue Kijun-sen line and the cloud is looking for more upside movements.

Immediate resistance is coming from the latest high of 1,779, before testing the October’s 2012 top of 1,795. Even higher, the 1,920 barrier, identified in September 2011 could be a crucial level for traders, while any more advances could drive the market to unseen territory.

In the negative scenario, a decline beneath the short-term moving averages could open the way for a rest near the 1,705 support, which stands slightly below the upper surface of the Ichimoku cloud. Moving lower, the 1,660 – 1,672 zone could act as key support as well.

Summarizing, the yellow metal has been in a bullish mode over the last two years and only a significant dive below the 200-day simple moving average (SMA) could lead the price to switch its current direction to negative. 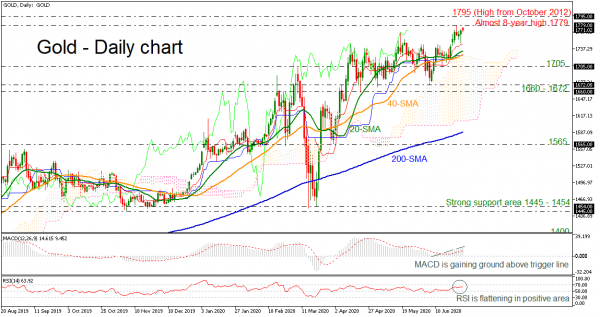