WTI crude oil futures have been trading within a narrow range, inside the Bollinger band confirmed by the momentum indicators. The RSI is moving sideways in the positive region near the 50 level, while the MACD is flattening marginally above trigger and zero lines. The flat movement is in line with the 40-period simple moving average (SMA), which acts as support for the bears.

If the price jumps above the upper Bollinger band, immediate resistance could appear at the 15-week peak of 41.21. More gains could send prices towards the 43.60 barrier and the 200-day SMA currently at 44.90.

In the negative scenario, a downside move could challenge the mid-level of the Bollinger band at 38.73, ahead of the 37.07 support, which overlaps with the lower surface of the band. Penetrating this strong support, it could open the door for the 200-period SMA at 35.90 and the 23.6% Fibonacci retracement level of the up leg from 10.00 to 41.21 at 33.85. Breaching this level, the 30.57 barrier could come into focus.

Summarizing, WTI futures are failing to improve their medium-term bullish structure over the last couple of weeks, suggesting a neutral bias in the near term. 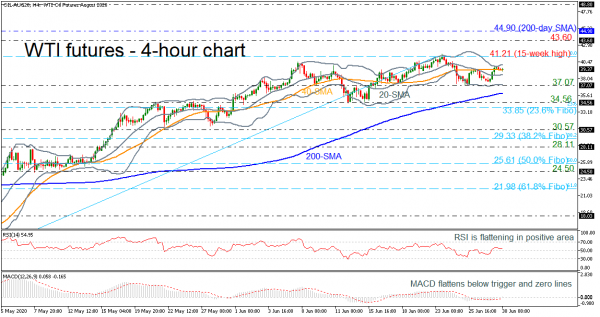