Overall, though, sentiment remains positive towards risk assets with the downside for stocks being limited thus far. So, if the stock market were to resume its rally, then this should help the Canadian and other commodity dollars to rise further. Conversely, a sharp drop for equities will be bad news for these risk-sensitive currencies.

But the USD/CAD has now reached a key technical juncture, which means we should get at least some short-term momentum depending on which direction it goes from here: 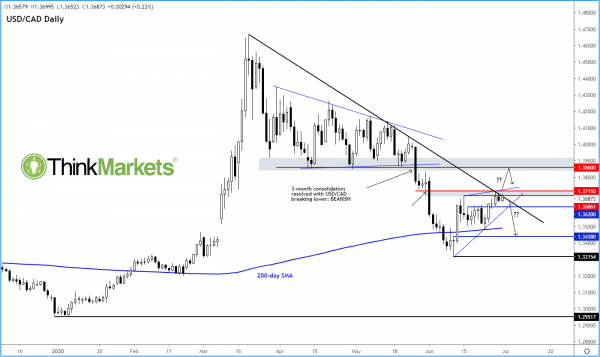 As per the charts, the USD/CAD was testing old support and resistance area around 1.3690-1.3720, where a bearish trend line was also converging. If this resistance holds firm, then we would favour looking for bearish setups to emerge in the next few days. However, a breakout could mean the squeeze may continue until the next key resistance area circa 1.3860, the base of the big breakdown towards the end of May.

Meanwhile, there are several scheduled fundamental events which could impact the USD/CAD from a macro point of view over the coming days. These include:

As highlighted, the most important Canadian data – GDP – will be released later at 13:30 BST. GDP is expected to have dropped 12.5% m/m in April following a 7.2% drop the month before. But if the actual number is better than that, then the USD/CAD could drop from the above resistance zone. A lot will then depend on the dollar and upcoming US macro pointers, with the most important data being the official monthly jobs report on Friday.