GBPUSD’s lack of momentum has frozen the pair around the mid-Bollinger band and above the 1.2462 mark, that being the 50.0% Fibonacci retracement of the down leg from 1.3514 to 1.1410. Despite the recent improvement from the lower Bollinger band, the short-term oscillators reflect a state of evaporated directional momentum.

The MACD and its red trigger line are flat at the zero mark, while the RSI is hovering marginally above the 50 threshold. The stochastic lines have stalled just above the 80 level but have yet to show signs of weakening, suggesting the price may continue its current trajectory. However, the horizontal 200-day simple moving average (SMA) indicates a predominant bias slightly supported by the convergence within the 50- and 100-day SMAs.

If buying interest picks up, early constraints could commence from the 1.2542 barrier, followed by a fortified border around the upper Bollinger band. This essential resistance area is constructed by the flattened 200-day SMA at 1.2684, the mid-Bollinger band and the 61.8% Fibo of 1.2711, overlapped by the diagonal line pulled from the 1.3514 top. Overcoming this confining structure, the 1.2812 upper bound may give way to a rally that tests the 76.4% Fibo of 1.3017 and the 1.3200 peak.

Summarizing, directional signals are non-existent in the short-term timeframe. That said, buyers would need to surpass the 200-day SMA and the descending line to build a bullish bias, while a break below 1.2075 would ignite negative tendencies. 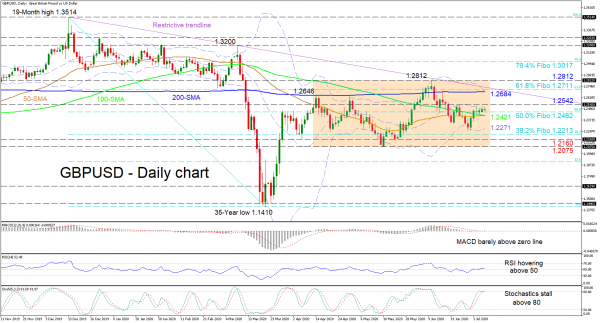