AUDJPY has shifted to neutral in the near term after pausing a rally that took the pair above the key 88.00 level, which is now acting as strong support.

Prices rose sharply from the June 6 low of 81.77 but the market became overextended with RSI reaching into overbought territory above 70. Upside momentum faded and AUDJPY has entered into a consolidation phase between the key level of 88.00 and the June 27 high of 89.41.

Strong support at 88.00 is expected to contain downside moves, as it has been doing in recent days. If it is breached, then this would open the way for further declines towards next support at 87.00 (previous resistance). From here there is important support at 85.65 (a previous support level in late June until early July). It is also the 50% Fibonacci retracement level of the rise from 81.77 to 89.41. A deeper decline from this area would shift the short-term uptrend and a top would be put in place at 89.41.

There are no clear signs indicating a reversal in the uptrend. The pair is neutral in the near term but the overall market structure is bullish on the daily chart. The Tenkan-sen line is above the Kijun-sen line and the market is above the Ichimoku cloud. Meanwhile, RSI remains above 50 in bullish territory. The 200-day moving average is rising with the market above it.

A successful break above the 89.41 high would open the way towards the next significant high of 90.72 that was reached in November 2015. Such a move would strengthen both the short and medium-term bullish bias. 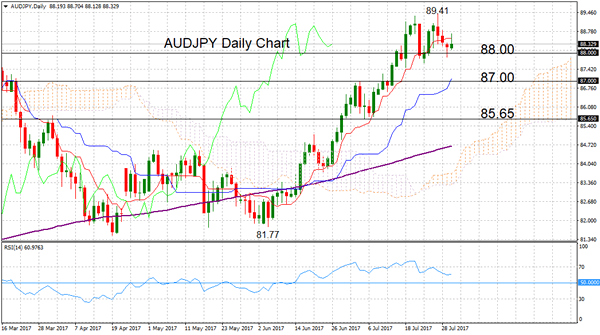