The pound has eased back after rallying on Tuesday ahead of Rishi Sunak’s “mini-Budget” summer statement, as the Chancellor prepares for the next stage of the UK’s economic recovery post lockdown. However, following Tuesday’s sizeable rebound, the dips could be supported, especially if the summer statement reveals some surprises the would be deemed beneficial for the economy.

The chancellor’s statement is expected at 12:30 BST. Among the measures, Mr Sunak is expected announce a £2 billion fund to help create jobs for younger people who are at risk of long-term unemployment. The chancellor is also expected to announce a 6-month stamp-duty holiday for the first £500,000 of all property sales to help revive the housing marketing, while it has also been reported that grants will be provided for homeowners as part of energy efficiency measures. Other measures to boost spending will likely include a cut in the VAT from the current 20% rate.

Meanwhile, the euro has also remained soft after it sold off Tuesday on the back of slight risk off tone in the equity markets and news the European Commission had lowered its GDP forecasts for the Eurozone. That put some downward pressure on the EUR/GBP, after the cross had rallied along with the other euro crosses on Monday. Today, the EUR/GBP has rebounded a little ahead of the summer. With Brexit concerns lingering, it remains to be seen though whether Tuesday’s selling was just a retracement in what has been a strong bullish trend for the EUR/GBP, or whether we will get some downward traction soon.

But at least from a technical point of, there has been some bearish development which suggests the EUR/GBP could be heading lower from here. As can be seen on the chart, the Chunnel broke below its bullish trend line, the 21-day exponential moving average and the 0.90 handle following Tuesday’s drop: 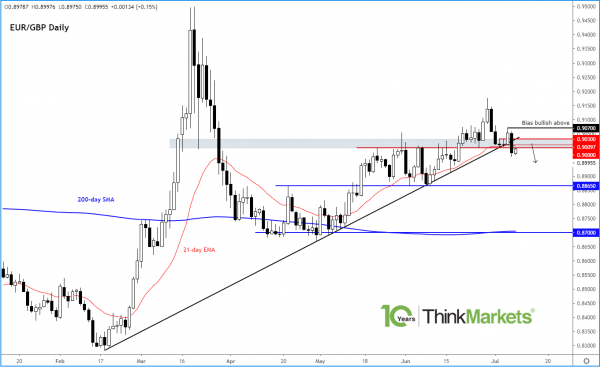 The cross is now testing the broken support around 0.90, which could offer resistance, potentially leading to another drop later on today. If the selling does resume here, then the bears may initially target the liquidity below Tuesday’s low, before setting their eyes on the next key daily support level around 0.8865.

However, if rates go back above the broken trend line and this week’s high (of just under 0.9070), then this would invalidate the bearish bias. If this happens, then I would expect the EUR/GBP to break to a new multi-month high in the not-too-distant future.