EURUSD has been trading sideways over the last month failing to improve the bullish rally that started from the 1.0870 support. Currently, the pair is standing above the 20-day simple moving average (SMA), however, the red Tenkan-sen line dropped beneath the blue Kijun-sen line, suggesting a possible downside retracement.

Looking at the momentum indicators, the MACD is hovering near the trigger line in the positive region, while the RSI is marginally sloping up above the 50 level in the short-term picture.

If the bulls send the price above the 1.1355 barrier, it could find immediate resistance at the three-month high of 1.1420 before touching the 13-month peak of 1.1495. Above these levels, the pair could open the door for more bullish actions, challenging the 1.1570 strong level, identified by the top on January 2019.

In the short-term, the picture remains neutral until EURUSD breaks the 1.1420 resistance to the upside. Alternatively, a decline below the 200-day SMA could shift the outlook to neutral-to-bearish in the medium-term as well. 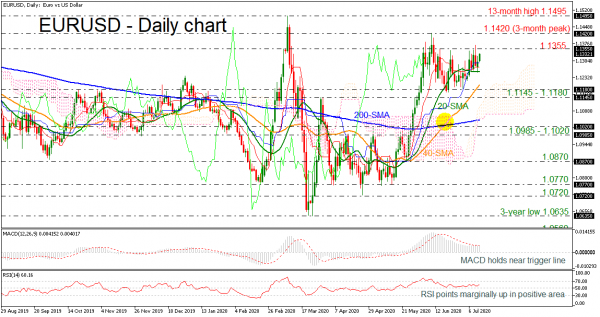