Action Forex
HomeContributorsTechnical AnalysisIs The AUDUSD About To Move To The Short Side?

Is The AUDUSD About To Move To The Short Side?

The Aussie Dollar has been on a bullish rampage of late as the currency pair has been buoyed by a range of technical and fundamental factors. In particular, the recent weakness of the greenback has proven to be a boon for the Aussie Dollar as the pair has moved sharply higher to test the bounds of the 0.8100 handle. However, some interesting technical factors could potentially be about to influence price action’s direction. Subsequently, it remains to be seen if the pair will retain its current directional bias.

From a purely technical perspective, the momentum has largely evaporated from the pair’s recent rally and failure to break through the 0.8100 handle. Subsequently, price action has started to drift lower over the past few days whilst the RSI Oscillator is in pull-back mode away from over bought territory. Additionally, the Stochastic Oscillator is largely supportive of a potential pullback as is the MACD. 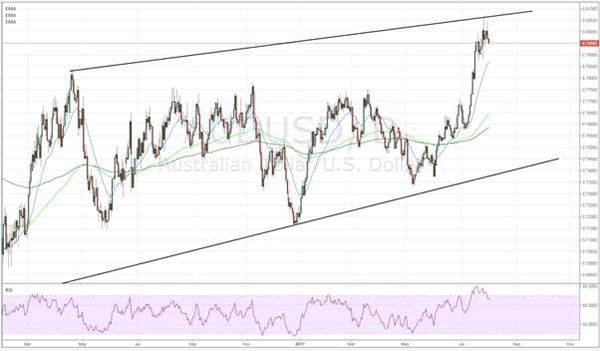 Fundamentally, the RBA’s decision to not move rates, whilst also hinting at some of the sectoral problems with the Australian economy, has sought to stall the Aussie Dollar’s advance. Additionally, there is little fundamental reason for the pair’s current valuation given the huge divergence between the U.S. and Australian economies. Subsequently, as we move towards the Non-Farm Payroll figures, a bounce back in the greenback’s sentiment is likely in the coming days.

Ultimately, the most likely scenario for the next few days is a gradual drift lower for the Aussie Dollar until it breaches near term support at 0.7939. At this point, anything could be on the cards for the pair and a sharp downside push back towards the 78 cent handle could be highly likely. However, despite the negative technical factors, the looming NFP event is likely to be the one that sets the near term trend. Subsequently, monitor the event closely as a result above 180k could see the pair rally strongly.

Blackwell Globalhttp://www.blackwelltrader.com/
The report provided by Blackwell Global Investments Limited ("Blackwell Global") is meant for informative reading and should not be relied upon as a substitute for extensive independent research . The information and opinions presented do not take into account any particular individual's investment objectives, financial situation, or needs, and hence does not constitute as an advice or a recommendation with respect to any investment product. All investors should seek advice from certified financial advisors based on their unique situation before making any investment decisions and should tailor the trade size and leverage of their trading to their personal risk appetite.