EURGBP is currently attempting to jump above the heavy 200-period simple moving average (SMA), which has kept the deterioration of the pair alive. The SMAs are somewhat all flat for now, reflecting the neutral tone of the pair, but an approaching bearish cross of the 200-period SMA by the 100-period one may revive negative tendencies.

The short-term oscillators suggest that positive directional momentum is strengthening. The MACD, in the negative region, has pushed above its red signal line and has neared the zero mark, while the improving RSI has stalled in bullish territory. Furthermore, the stochastic oscillator holds a positive bearing with the %K line having climbed into the overbought area.

Concluding, EURGBP in the very short-term timeframe preserves a neutral tone, stuck below the 200-period SMA. That said, a break above 0.9062 or below 0.8968 could see a clear direction begin to unfold. 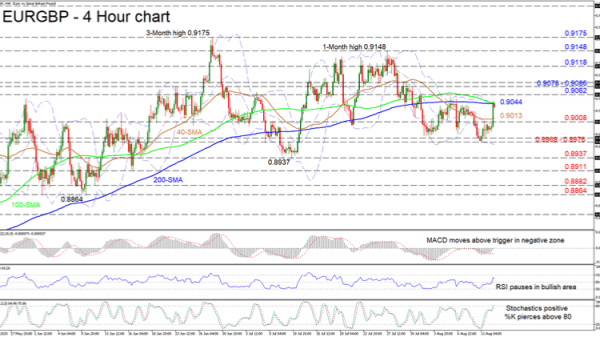