USDCAD has been trending upwards over the last two weeks following the bounce off a fresh eight-month low of 1.2993. However, a strong resistance around the 1.3207 barrier has been a barrier to additional gains over the past week, shifting the spotlight back to the ascending trend line around 1.3150.

The momentum indicators in the four-hour chart though are currently supporting the ongoing sideways move in the price. Specifically, the RSI is holding around the 50 level, while the stochastic is reversing lower after posting a bearish crossover within its %K and %D lines below the overbought zone.

Should the price close decisively above the 1.3207 roof, bulls could extend the uptrend towards the 1.3260 – 1.3270 zone. Further advances above this level, could then target the area around 1.3345 which had successfully halted upside movements in the past.

Overall, USDCAD is trying to post some gains but it needs to attract buying interest above the 1.3270 resistance to confirm a bullish bias in the short-term. 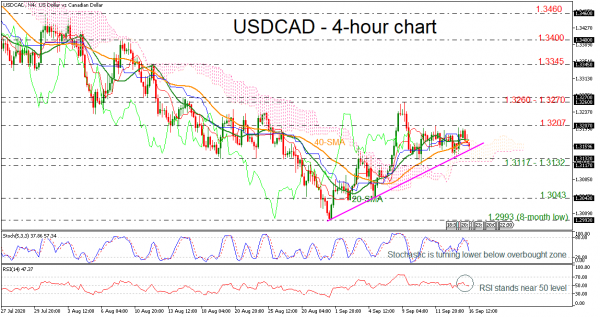