EURUSD’s refusal to dive below the 1.1600 floor for the second time has developed into a bullish wave in November, pushing the price comfortably into the 1.1900 area and to an almost three-month high of 1.1975 on Monday.

From a technical perspective there is scope for additional improvement in the short run as the price is deviating above the Ichimoku cloud and its 20- and 50-day simple moving averages (SMAs). In other encouraging signals, the MACD continues to gain momentum within the positive area, the supportive red Tenkan-sen line keeps strengthening above the blue Kijun-sen line, while the RSI has yet to jump into overbought territory.

Still, some caution is warranted as the pair is testing the tough ascending trendline, which has been successfully curbing upside movements over the past two months. The flattening upper Bollinger band is also in the same location, increasing the case for a downside correction. Hence, a decisive close above the trendline and September’s peak of 1.2009 might be required to set the stage for another bullish thrust.

Meanwhile in the medium-term picture, the neutral profile remains intact within the 1.1600 and 1.2000 borders.

Summarizing, EURUSD seems to be testing a make or break point although the risk is still largely skewed to the upside. A close above the trendline could boost buying appetite, while a rejection at this point may expose the pair to a downside correction. 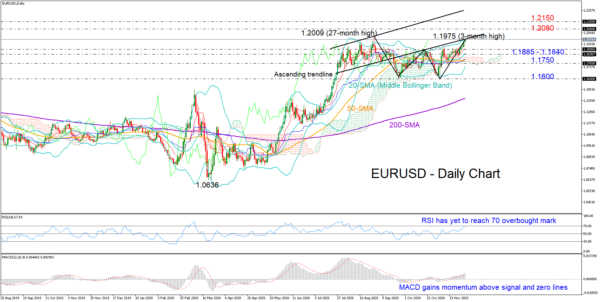