As it was expected, previous trading session the yellow metal spent in a steady surge against the American Dollar. However, the soar did not last for long, as it was stopped already at the closest resistance level set up by the monthly R1 at 1,292.91. At the moment, the pair is moving horizontally, being squeezed between two notable barriers. The first is made of a combination of the 100- and 200-hour SMAs as well as the weekly PP at 1,284.70. The other one is made of the above monthly R1, but most importantly of an area located around the 1,296.00 mark, which represents a crossroad of the two junior ascending channels’ upper boundaries. Hence, it seems that the bullion will prefer to move either horizontally, or downwards. 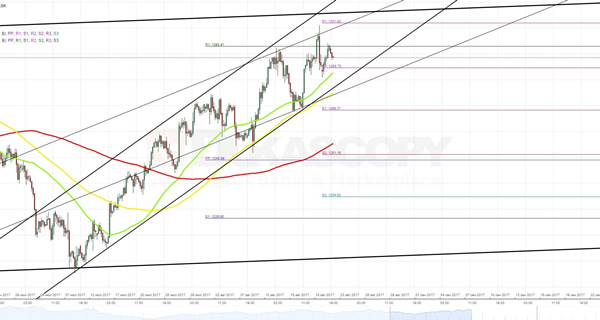 Gold Looking To Rebound On 38.2% Fibonacci After Pausing Downtrend

Gold: Yellow Extends Its Losses In The Asian Session