NZDUSD has found a foothold at the 0.7098 barrier that happens to be the 38.2% Fibonacci retracement of the up leg from 0.6510 until 0.7464, which is aligned with the Ichimoku cloud’s lower surface. The predominantly bullish simple moving averages (SMAs) are defending the positive structure. However, the dipping red Tenkan-sen line is suggesting growing negative momentum, while the flattening blue Kijun-sen line is promoting a stall in the retreat from the 43-month peak of 0.7464.

The short-term oscillators are mirroring the latest price pullback and rebound but seem to be favouring the downside. The MACD, beneath its red signal line, is sliding below its zero mark, while the RSI is trying to maintain gains in the bearish region. Despite having stepped above the 20 level, the weak stochastic lines are not indicating a clear price direction but seem set to flirt again with the oversold border. That said, worth mentioning are the congested support levels, which could prove difficult for sellers to overpower.

If the bounce off the 38.2% Fibo gains momentum, an early zone of resistance could develop from the ceiling of the cloud until the 23.6% Fibo of 0.7239, also containing the 50-day SMA of 0.7221. Pushing higher and overrunning the nearby barrier of 0.7306 as well could inject the necessary confidence in the pair to bring forth a test of the resistance band of 0.7437-0.7464. A climb above the latter, which is the fresh multi-year peak, could reboot the uptrend lifting the pair towards the 0.7525-0.7577 limiting section.

Summarizing, NZDUSD’s bullish bias appears secure above the 100-day SMA and the 0.7000 boundary. 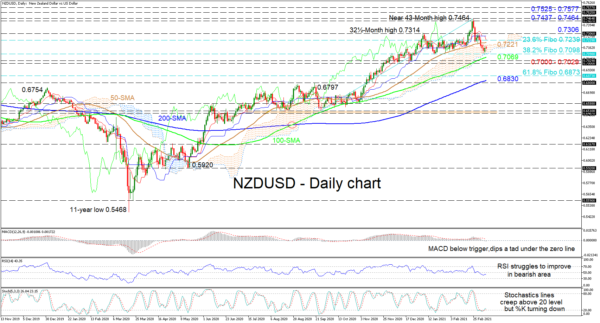