The American dollar recovered the ground lost on Monday against most of its major rivals, and even entered positive territory against some of them, but gains remain shallow ahead of first-tier macroeconomic events coming during the second half of the week. Most action took place right after London’s opening, when a strong opening of European equities interrupted the reigning risk aversion seen on the previous session. The EUR/USD pair fell down to 1.1744, from where it bounced to stabilize around 1.1760, level that the pair maintained all through the US session. Weighing on the common currency was the only piece of macroeconomic news released in the EU, German’s ZEW survey showed that sentiment fell beyond expected. Business sentiment in the country for August fell to 10 from 17.5 in July, while for the whole EU it retreated from 35.6 to 29.3. The assessment of the current situation, however, remained strong up to 86.7 from previous 86.4. In the US, the Richmond Fed manufacturing index remained flat at 14 in August, beating expectations of 11.

Things will heat up this Wednesday, with August preliminary PMIs for the EU and the US, and new home sales for this last, although investors may wait for the upcoming speeches from Yellen and Draghi within the Jackson Hole Symposium that will start on Thursday, and extend into the weekend.

The recovery above 1.1800 was once again reversed, and with the pair having reached a lower high so far this week for a third consecutive time, somehow indicating decreasing buying interest around the common currency, although the greenback is nowhere near on demand. The short term technical outlook is neutral according to the 4 hours chart, with the price right below directionless 20 and 100 SMAs, whilst technical indicators head nowhere around their mid-lines. The immediate support is the weekly low, at 1.1730, with a more relevant one in the 1.1680/90 region. Below this last, the pair can gain bearish momentum and extend its monthly decline beyond the current low of 1.1661. Strong selling interest is capping advances in the 1.1820/30 price zone, so it will take a break beyond 1.1860 to see the pair gaining bullish traction. 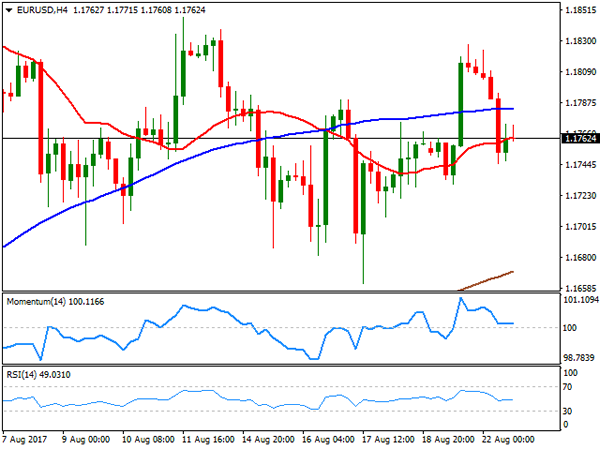 The USD/JPY pair recovered slowly but steadily this Tuesday, ending the day not far from a daily high of 109.54, amid a recovery in worldwide equities and a modest uptick in US Treasury yields after Monday’s decline to fresh 2-month lows. US data was generally positive, as US home prices rose 1.6% in the second quarter of 2017, despite June’s monthly advance was shy of expectations, up by just 0.1%, whilst the Richmond Fed survey showed manufacturing activity in the region was better-than-expected, with the index at 14 for August, against market’s forecast of 11. Ahead of key speeches from Fed’ Yellen and ECB’s Draghi, Japan will release the August preliminary Nikkei Manufacturing PMI during the upcoming Asian session, expected at 52.3 from a downwardly revised 52.1 in July. In the 4 hours chart, the upward potential remains limited, as the price is well below bearish 100 and 200 SMAs, while Friday’s high of 109.59 comes as an immediate resistance. Technical indicators in the mentioned time frame have entered positive territory, but the RSI has lost upward strength and turned neutral, reflecting the cautious stance towards the greenback that prevailed these last few weeks. 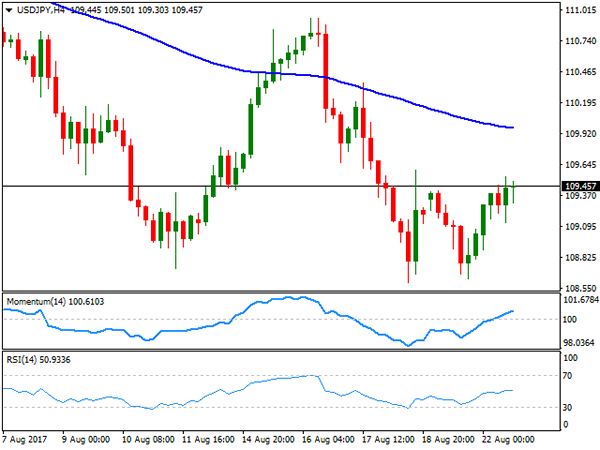 The GBP/USD pair fell down to 1.2810, its lowest in nearly two months, as dollar’s short-term demand affected more the weakened Pound. There were a couple of minor releases in the UK that came in above expected, with the CBI industrial trend survey showing that manufacturing grew in August, as the index came in at 13 from July’s 10, also beating expectations of 8, while public sector net borrowing, excluding the nationalized banks, was in surplus by £184m in July, the first surplus since 2002, while excluding public sector banks, it increased by £1.9 billion to £22.8 billion in the current financial year-to-date, compared with the same period in 2016. The Pound, however, is unable to attract buyers ahead of the next round of Brexit negotiations, taking place in Brussels next week. From a technical point of view, the downside remains favored, given that in the 4 hours chart, the 20 SMA began gaining downward momentum above the current level, whilst technical indicators hold within bearish territory, with the RSI indicator already gyrating south around 35. A bearish extension through 1.2810 should favor an approach to the 1.2700/20 region, where the pair presents multiple relevant daily highs and lows from earlier this year. 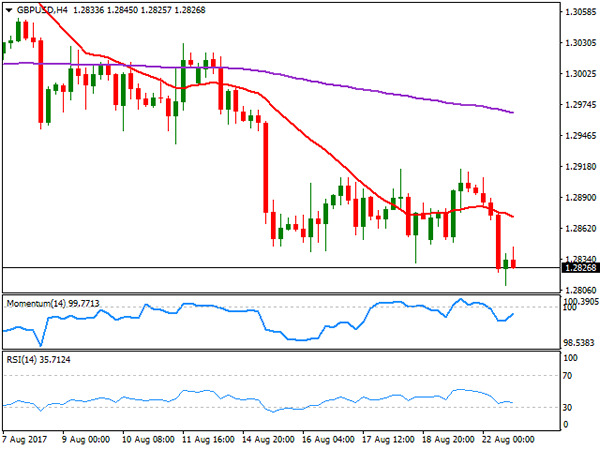 Gold prices eased this Tuesday, with spot settling at $1,285.44 a troy ounce, and trimming most of its weekly gains as the dollar rallied on better markets’ mood. Still marginally higher for the week, a clearer picture for gold may come on Thursday, when Fed’s Yellen will offer a speech within the Jackson Hole Symposium. The head of the Federal Reserve is not expected to talk specifically about the ongoing monetary policy, but investors will be trying to read in-between lines, looking for clues on what’s next, particularly on rate hikes. In the meantime, the daily chart indicates that the upward momentum eased, but also that the commodity is far from bearish territory, as technical indicators eased modestly, but remain well above their mid-lines, whilst the price is far above all of its moving averages. In the shorter term, and according to the 4 hours chart, gold maintains a neutral stance, trading slightly below a horizontal 20 SMA and with technical indicators hovering around their mid-lines. 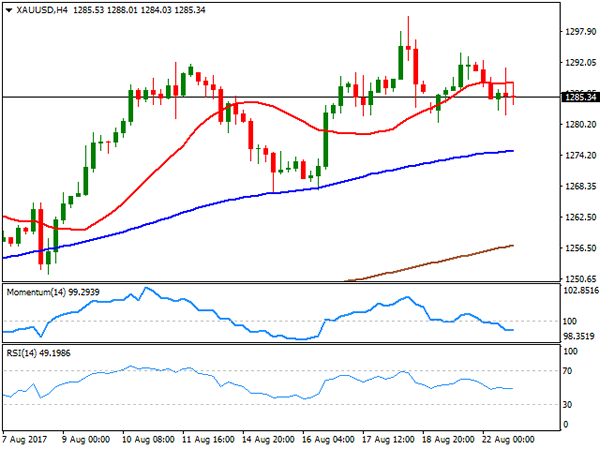 Crude oil prices posted a modest advance this Tuesday, with WTI ending the day at $47.84 a barrel, helped by expectations of another crude stockpile draw-down in the US last week. According to a Reuters’ poll, inventories are expected to have fallen by around 3.4 million barrels in the week ended August 18th. The advance, however, was limited by news that Libya’s Sharara oil field was reopening after its latest shutdown. The API report, to be released late Tuesday, could give a first glance of what the EIA report will bring. The shallow daily bounce hasn’t been enough to revert the negative tone seen on previous updates, as in the daily chart, the commodity has barely bounced from its 100 DMA, while technical indicators remain within bearish territory, but lacking directional strength. In the 4 hours chart, the 100 SMA is gaining downward traction above the current level, the RSI remains flat around its 50 level, whilst the Momentum indicator presents a strong downward slope within negative territory, all of which maintains the risk towards the downside. 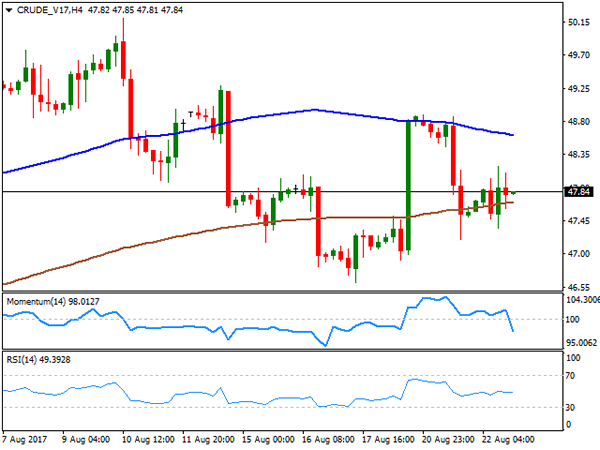 Wall Street edged sharply higher this Tuesday, with the DJIA adding 196 points, its largest daily rally in four months, to end at 21,899,89. The Nasdaq Composite gained 1.36%, to close at 6,297.48, while the S&P settled at 2,452.51, up by 24 points. Speculation that the US administration will focus now on the long promised tax reform, woke up investor’s appetite for equities, also getting support from a recovery in their overseas counterparts that rallied on the back or rising base metals. Only three members were down within the Dow, with Intel Corp. being the worst performer, down by 0.72%. Cisco Systems, on the other hand, led advancers, up 2.0%, followed by Caterpillar that added 1.95%. In the daily chart, the index pared its recovery a few points below a flat 20 DMA at 21,936, the immediate resistance, whilst technical indicators bounced from oversold levels, with the RSI indicator already entering positive territory, now at 54 and anticipating some further gains for this Wednesday. In the 4 hours chart, technical indicators lost upward strength near overbought territory, whilst the index ended well above its 20 and 200 SMAs, but below the 100 SMA, currently at 21.954. 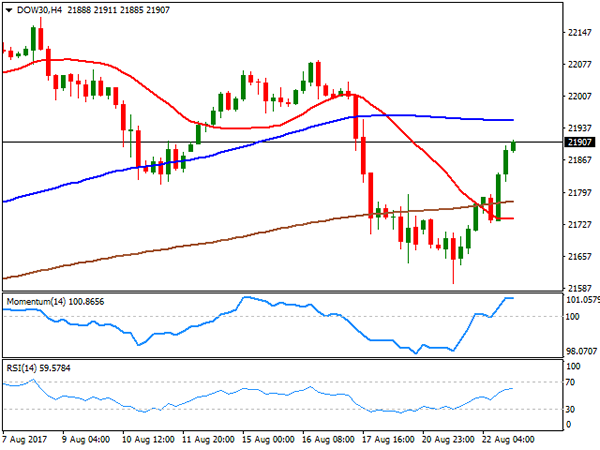 The FTSE 100 closed the day at 7,381.74, up by 63 points, as an advance in mining-related equities offset large losses from insurance related equities. Provident Financial plunged 66.22% after issuing its second profit warning in three months, losing two thirds of its value. Tesco led the advance, adding 4.10%, while Rio Tinto, Glencore and BHP Billiton added over 2.0% each, also making it to the top ten list. The positive tone persists in after-hours trading on Wall Street’s recovery, but the daily chart for the Footsie shows that technical indicators remain within bearish territory, with limited upward strength, whilst the 20 and 100 DMAs remain above the current level, not enough to confirm a bullish extension for this Wednesday. In the 4 hours chart, the index presents a modestly positive tone, as it settled above a horizontal 20 SMA while the Momentum indicator aims higher around its mid-line, and the RSI at 55. 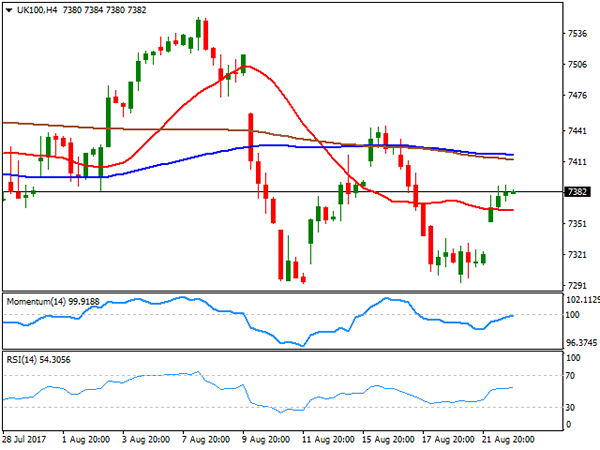 European equities edged higher this Tuesday, reversing a three-day losing streak, with the German DAX adding 165 points to end at 12,229.34, amid a recovery in the mining and automotive sectors. Within the DAX, only Commerzbank closed in the red, shedding 0.29%, while Fresenius led advancers, adding 3.36%, followed by Linde which gained 2.96%. The daily chart for the index shows that it settled above its 20 DMA, while technical indicators have turned north, but still hovering around their mid-lines and barely above this month highs, not enough to indicate a bullish continuation for this Wednesday. In the 4 hours chart, the index recovered above its 20 and 100 SMAs, while technical indicators entered positive territory but lost upward strength, in line with the longer term perspective. Further gains beyond the 12,300 region where the index topped last week, will likely encourage bulls, resulting in a firmer upward movement this Wednesday. 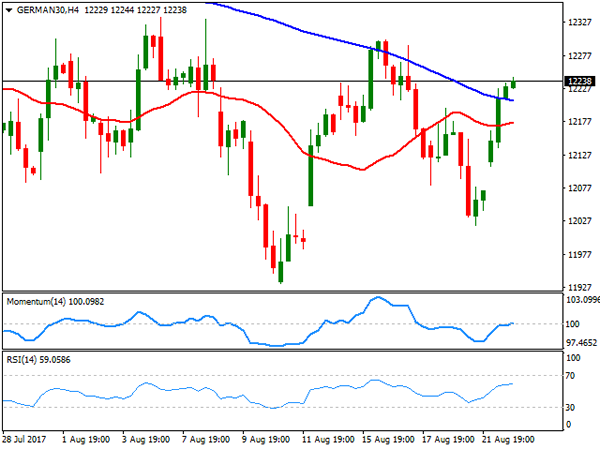