USDCAD is touching the descending trend line after the jump above it in the previous week. The price is returning lower after the pullback off the 1.2645 resistance, remaining within the 20- and 40-day simple moving averages (SMAs). The MACD is flattening near the zero level, while the RSI is ticking slightly up near the neutral-threshold of 50.

Immediate resistance could be faced near the 1.2645 barrier and the Ichimoku cloud before travelling towards the 1.2750 level. An upside move above these lines could meet the 23.6% Fibonacci retracement level of the down leg from 1.4668 to 1.2365 at 1.2907 and the 1.2950 hurdle. Marginally higher, the 200-day SMA could attract traders’ attention around the 1.3000 psychological level.

Overall, USDCAD has been in a downtrend since March 2020, despite the latest break above the falling trend line. A climb above the 200-day SMA could change the bearish outlook to bullish. 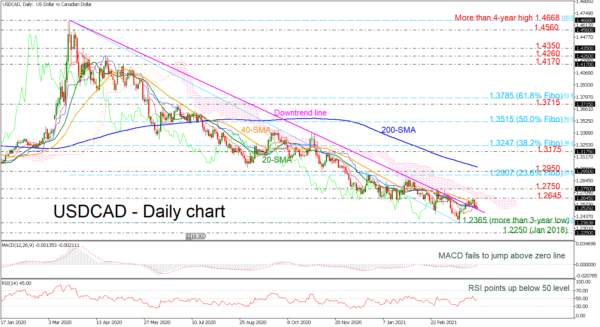