The American dollar ended the day lower against its major rivals after starting the day with a positive tone, amid an extension of the positive market mood seen on Wednesday. The greenback gain modestly in quiet Asian trading and extended its advance early Europe, helped by a headline coming from Reuters, stating that ECB policymakers were concerned by the strength of the EUR, and may then delay the beginning of the end of QE. The EUR/USD pair fell down to 1.1822, its lowest for the week, although the dollar lost market’s favor after Wall Street’s opening, despite another batch of mixed data coming from the US. US weekly unemployment claims, for the week ended August 26th resulted at 236K, better than the 237K expected, but above a previously revised 235K, while the Chicago PMI remained in August at 58.9, above the 58.5 expected. Consumer spending rose less than expected in July, up by 0.3%, but the most relevant core PCE index advanced at 1.4% YoY, below the 1.5% gain in June, the smallest annual increase in over a year and a half. Hitting the greenback and pushing the EUR/USD pair up to 1.1907, were US pending home sales, falling by 0.8% in July and when compared to a year earlier.

All eyes are now on the upcoming US NFP report to define whether the greenback can extend its latest gains heading into the weekend. The US economy is expected to have added around 180K new jobs in August, while the unemployment rate is seen unchanged at 4.3%. Average hourly earnings are expected to post a modest advance yearly basis to 2.6% from 2.5% previously.

The short term technical picture is still bearish for the pair, as in the 4 hours chart, the price remains below a bearish 20 SMA, currently around 1.1945, while the Momentum indicator keeps heading south near oversold readings, as the RSI indicator consolidates around 45. Below the daily low, the pair has a stronger support in the 1.1780/90 region that if its broken, would result in a stepper decline down towards the 1.1700 level, where the pair has a daily ascendant trend line coming from early April low of 1.0603. To the upside, the level to watch is 1.1920, as an upward extension beyond it should result in a bullish extension that can reach up to 1.2000. 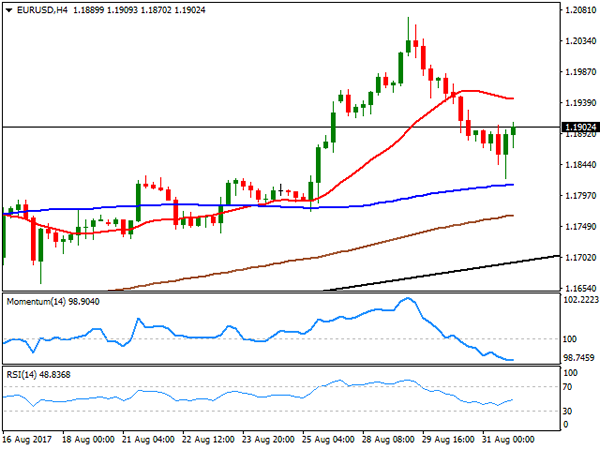 The USD/JPY pair trimmed all of its early gains to end the day in the red around 110.10, down from a fresh weekly high of 110.66. The positive tone in worldwide equities maintained the pair in the green at the beginning of the day, but fell back on not so encouraging US inflation and housing data, as Core PCE inflation advanced at its slowest pace since December 2015 this past July, up by 1.4% yearly basis, and by 0.1% in the month, while Pending Home sales fell by 0.8%, down for the fourth time in five months. During the upcoming Asian session, Japan will release its Nikkei manufacturing PMI, expected unchanged at 52.8 and August consumer confidence, forecasted at 43.5 from previous 43.8. The short term picture is still marginally positive for the pair, as technical indicators pared losses and are currently aiming to regain the upside, with the Momentum within overbought levels and the RSI around 56. In the same chart, the price holds above its 100 SMA, but failed to hold above a bearish 200 SMA, now the immediate resistance around 110.25. An upward acceleration above this last should favor a retest of the mentioned high, but it will take a break above 110.94, August 16th high, to confirm a steeper recovery in the days to come. 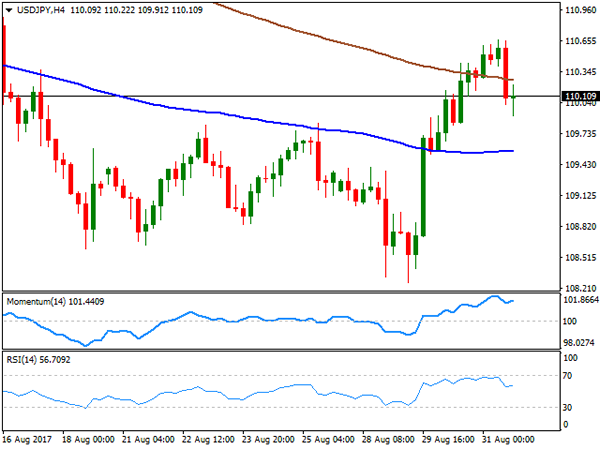 The GBP/USD pair is ending the day pretty much unchanged for a third consecutive day, buy above the 1.2900 level after establishing a fresh weekly low of 1.2852 early US session. The lack of news coming from the UK this week, however, has kept the pair within a limited range, but on Friday, the August Markit manufacturing PMI for the UK will bring some hints on the health of the UK, expected at 55.0 from previous 55.1. With no progress between the EU and the UK Brexit negotiations, hopes of a softer Brexit will re-surge, but seems that just be enough to keep the Pound afloat. The pair keeps posting lower lows daily basis, which favors a new leg lower for this Friday. The upcoming US employment report may result in the pair falling down to 1.2773, August 24th low in the case of an upbeat surprise, mostly considering that intraday technical readings keep favoring the downside, as in the 4 hours chart, technical indicators remain within negative territory, although losing their bearish strength, whilst the price is below its 20 SMA that remains flat around 1.2920 a major static resistance. Selling interest is still strong around the current 1.2920/30 region, although steady gains beyond the level should result in a test of the 1.2965 region, en route to 13000 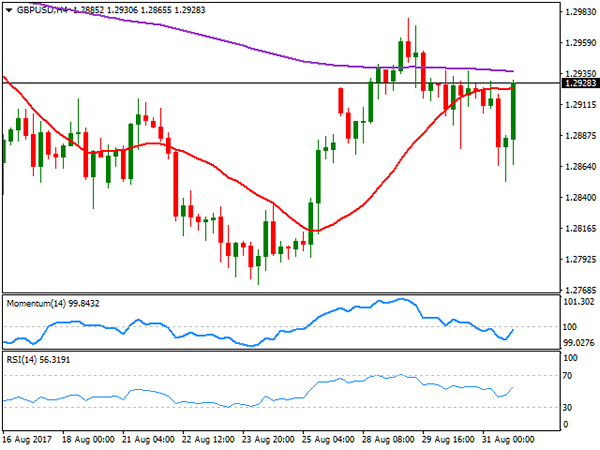 Spot gold regained the upside after US inflation failed to impress, trimming all of its previous two days’ losses to settle a few cents below the $1,320.00 level. The US core PCE inflation, Fed’s favorite inflation gauge remained unchanged yearly basis at 1.4% in July, well below the Central Bank’s target of 2.0%. The commodity is ending August roughly 4% higher, and at its highest since November 2016, when it run briefly up to 1,337.35, on the back of Trump’s victory in the US Presidential election. The US inflation figure released today reaffirms the case for a delay in US rate hikes, underpinning the metal. From a technical point of view, the daily chart shows tat technical indicators resumed their advance with the Momentum heading strongly up at fresh August highs, whilst the 20 DMA accelerated north far below the current level, all of which supports further gains for this Friday, particularly if US employment report disappoints. In the shorter term, the technical outlook is also positive, as the 4 hours chart for the commodity shows that it quickly recovered above a bullish 20 SMA, while technical indicators entered positive territory, but quickly lost upward strength, with the Momentum now in neutral territory. An extension beyond 1,325.94, this month high, will confirm the bullish continuation for this last day of the week. 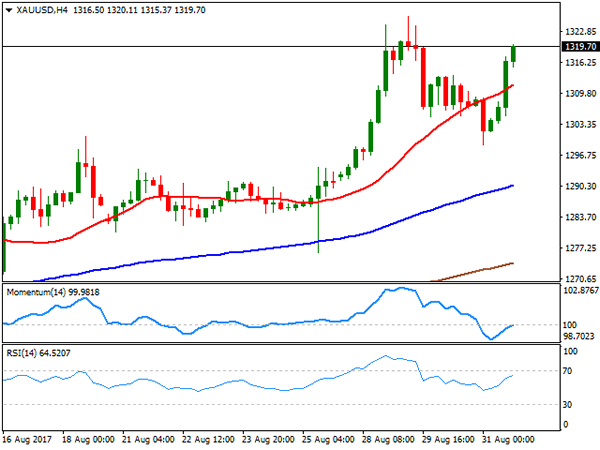 Crude oil prices changed course this Thursday, surging to their highest in three days, backed by news indicating that the US Department of Energy approved a crude loan to Phillips 66’s Westlake refinery in Lake Charles, Louisiana, to balance Hurricane Harvey’s supply disruptions. A total of 1 million barrels will be sent to the refinery during the next few days. Adding to the bullish case of the commodity, were news indicating that OPEC oil output fell in August by 170,000 barrels per day, from a 2017 high, help by Libya’s output disruptions. West Texas Intermediate crude futures ended the day a few cents above $47.00 a barrel, and the daily chart shows that the intraday advance stalled right below the 100 DMA, at 47.25, while technical indicators have turned higher but remain in negative territory, all of which limits chances of further gains as long as the price remains below the mentioned resistance. In the 4 hours chart, the price remains below its 100 and 200 SMAs, while technical indicators entered positive territory, but the RSI lost upward momentum and is turning lower around 56, also indicating a limited upward potential at the time being. 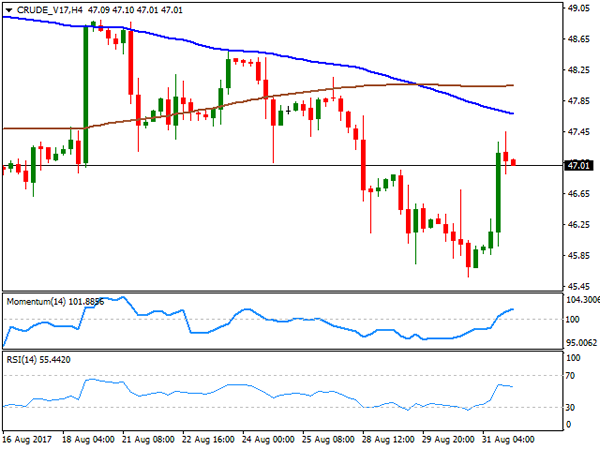 US equities ended the day and the month higher, with the Dow Jones Industrial Average adding 60 points on the day, to end at 21,952.35, and up for around 0.3% in the month. The Nasdaq Composite settled at 6,428.66 a new record high, adding this Thursday 60 points and 1.3% higher for August. Finally, the S&P settled at 2,471.65, up 14 points for the day, and by 0.1% for the month. El du Pont was the best performer among the Dow, backed by a rally in oil prices, adding 1.63%, followed by United Health Group, which gained 1.54%. Wall Disney led decliners, closing the day 1.63% lower, followed by Wall-Mart Stores that shed 0.60%. The index is up for a fifth consecutive month, but marginally, and saved at the last minute by hopes the US tax reform will come sooner than later. From a technical point of view, and according to the daily chart, the index seems poised to extend its advance, as it advanced further above its 20 SMA, while the RSI indicator aims higher around 57. The Momentum, however, struggles below its mid-line, failing to confirm further gains ahead. Shorter term, and according to the 4 hours chart, the index extended its advance above all of its moving averages, with the shorter one, the 20 SMA aiming to advance above the larger ones, a sign of bullish continuation, and whit technical indicators holding near overbought readings, also in line with additional advances. 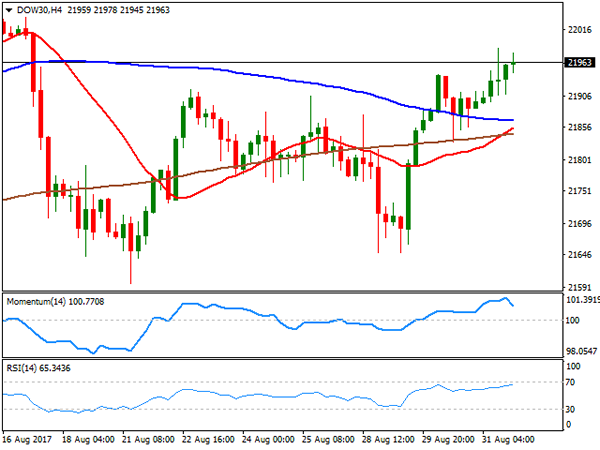 The FTSE 100 ended the day at 7,430.62, up by 66 points as Chinese strong PMIs boosted the mining sector. The index logged a monthly 0.8% gain helped additional by Pound’s weakness. The official Chinese manufacturing PMI rose to 51.7 in August from the previous month’s 51.4, indicating a pickup in the sector, and anticipating increasing demand for base metals. Mediclinic International added 2.89%, leading advancers, followed by Anglo American that gained 2.82%. Losers were led by G4S that shed 2.01%, followed by Provident Financial that lost 1.01%. The technical picture is now more constructive, as in the daily chart, the index settled above all its 20 and 100 moving averages, while technical indicators entered positive territory, maintaining their bullish slopes and supporting additional advances for this Friday. In the shorter term, and according to the 4 hours chart, the index surpassed all of its moving averages, but technical indicators stand directionless within positive territory, as the index was unable to surpass the strong resistance around 7,444, a level that capped advances since early August. 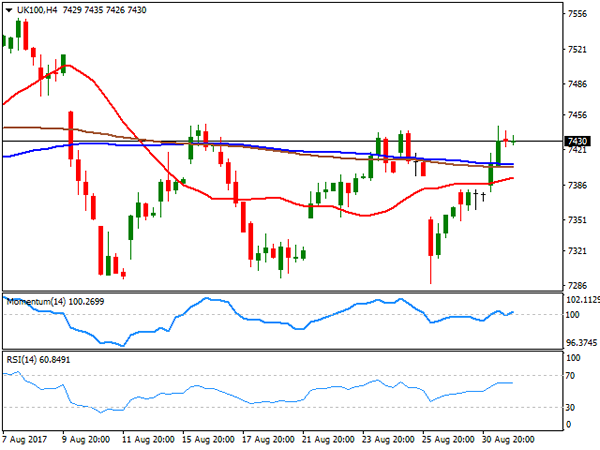 European equities extended their recovery this Thursday, with the German DAX ending the day at 12,055.84, up in the day for 53 points. Strong EU inflation figures underpinned investors’ mood, advancing 1.5% when compared to August 2016, and with the core reading up by 1.3%, matching July’s figure, but above market’s expectations of 1.2%. Within the German index, Deutsche Lufthansa was the best performer, adding 3.05%, followed by Heidelberg Cement that added 2.35%. The worst performer on the other hand was Continental, down 1.25%, followed by Daimler that shed 0.63%. The daily chart for the benchmark indicates that it recovered above its 200 DMA, but it´s still far below the shorter ones, while the Momentum indicator is flat around its 100 level, while the RSI aims higher, but around 43, limiting the upward potential, at least as long as it holds below 12,142, where the index has its 20 DMA. In the 4 hours chart, the index was unable to settle above a bearish 20 SMA, whilst technical indicator retreat from around their mid-lines, indicating that the short-term risk is towards the downside. 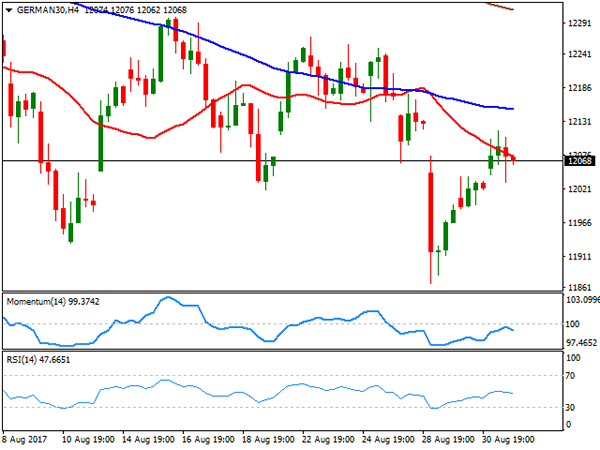