EURJPY continues its advance from the December lows, amid persistent positive momentum. Moreover, the pair’s successive higher lows together with the recent golden cross, where the 50-period simple moving average (SMA) has crossed above the 200-period SMA, reinforce the case for a sustained bullish outlook.

Short-term momentum indicators are also supporting a positive bias. The RSI is located above its 50 neutral mark, while the MACD is found above zero and its red signal line, which might indicate that momentum continues to gain traction, which could indicate that the optimistic bias might be gaining more traction.

Should the bulls maintain control, initial resistance might be found at the congested region which includes the 131.44 and 131.57 level. Crossing above the latter could strengthen the pair’s bullish momentum, opening the door towards the 132.60 hurdle, before buyers shift their attention towards the 132.90 barrier.

On the flip side, if the price breaks below its 50-period SMA currently at 130.94, negative forces might resurface, sending the price to test the 130.63 obstacle. A break below that point could open the way towards the congested region which encapsulates the 130.15 and 130.00 support, before sellers eye the 129.60 obstacle.

In brief, the overall outlook for the pair is bullish. For sentiment to change, sellers would need to drive the price below the 50-period SMA. 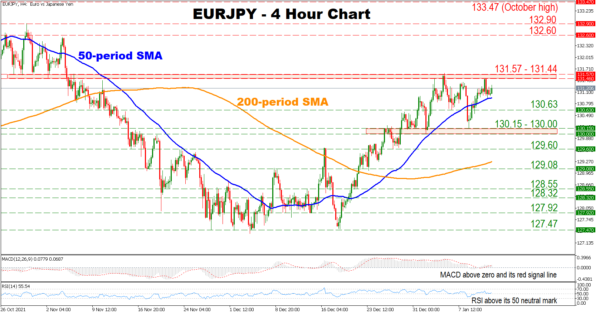