GBPUSD is reversing following the advance to the 1.3745 level, which represents a nearly three-month high. Although the price declined following the touch of the 200-day simple moving average (SMA), it remains above the long-term declining channel. The MACD oscillator is still holding above its trigger line in the positive region with weak momentum, while the RSI is flattening above the neutral threshold of 50.

In the alternative scenario, a rally above recent highs could take the currency to the 61.8% Fibonacci level of 1.3838 and then to the 1.3910 barrier. Even higher, the psychological number of 1.4000 may put an end to bullish moves.

All in all, GBPUSD has largely maintained a bullish bias since the bounce from 1.3165, although the recent bearish days may portend a negative correction. 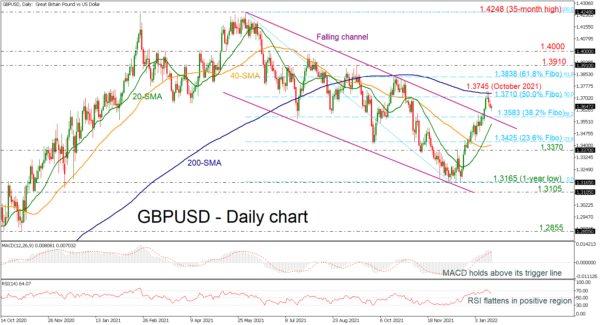