WTI oil futures are struggling to some extent to boost the one-month uptrend, which began from the 66.12 level, even after ticking slightly above the 7-year high of 85.39. That said, a price close north of the 7-year high would be the fuel required to reinforce upside momentum. Furthermore, the climbing simple moving averages (SMAs) are nurturing the positive structure.

The rising Ichimoku lines are implying that bullish forces remain robust, while the short-term oscillators are promoting a positive preference in the commodity. The MACD, some distance north of the zero mark, has nudged back above its relatively flattened red trigger line, while the RSI is improving over its 70 level. The stochastic oscillator is on the bullish camp and the current dip in the %K line is reflecting buyers’ efforts to overcome the 7-year high.

In the positive scenario, a definitive price close north of the 7-year high of 85.39 could bring the 86.39 resistance barrier into play. If the price advances further, resistance may show face between the 88.17-89.55 region, which formed over September and November 2014. Overcoming this boundary too, the price could then propel for the 91.77 high, identified in the early part of October 2014.

If the 7-year high curbs improvements, downside friction may emanate from the red Tenkan-sen line at 84.63 and the nearby 82.84-83.49 support border. If a stronger price pullback unfolds, the price may then target the 50-period SMA at 81.38, adjacent to the Ichimoku cloud’s upper surface and the 80.37-80.92 obstacle. Sinking further, traders’ attention may then shift toward the 100-period SMA at 78.73, overlapping the cloud’s lower band.

Summarizing, WTI oil futures are sustaining a bullish bias above the 82.84-83.49 support band and the SMAs. For negative tendencies to spark concerns about the latest uptrend, the price would need to slide beneath the cloud. 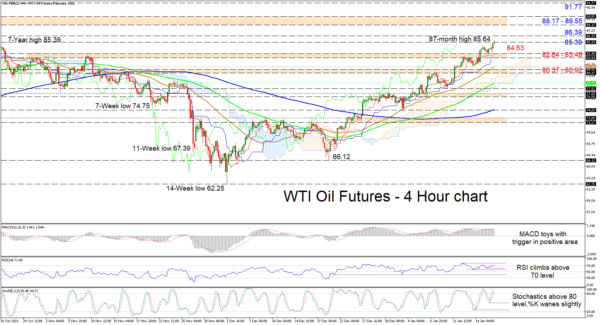