The US inflation data published on Wednesday triggered a strong and unequivocal reaction from financial markets, allowing more certainty about starting a new market cycle.

Yesterday’s report showed close to zero price growth for July, while annual CPI growth slowed from 9.1% to 8.5%. An impressive contribution came from the fuel side. The slowdown was faster than forecast, causing markets to revise near-term expectations fundamentally. The main scenario was a 50-point Fed rate hike on 21 September, up from 75.

Yesterday’s report pushed the dollar index under 105, where the lows of the pullback to early August were. Thus, a sequence of increasingly lower lows and lower highs is forming in the DXY. The index has fallen below May and June peaks, indicating that the market is ready to move further downwards.

We also note that the Dollar Index closed on Wednesday below the 50-day moving average, which has served as a support line for the uptrend since June last year. 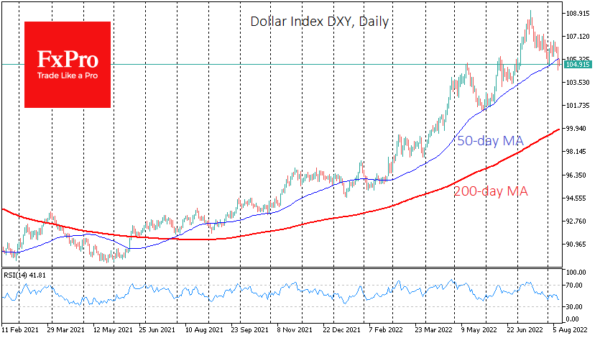 The strength of the most popular currency pairs with the Dollar is also in favour of breaking the trend. AUDUSD gained almost 2% on Wednesday. A powerful wave of growth in the Aussie took it immediately above 0.7000, a multi-year pivot point, and allowed it to rewrite the two-month highs. 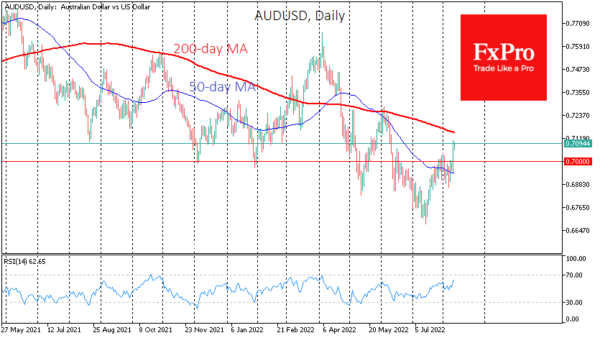 New Zealand’s kiwi also proved a break of the medium-term trend by sharply moving up from its 50-day average.

We also saw sharp moves from key levels in the stock market, where the S&P500 and Nasdaq interrupted a sluggish correction and consolidated above previous local highs, thus stopping talk that the current bounce will end where it did in June.

It is also noteworthy that the reversal of the Dollar’s bullish rally is well within the historical pattern whereby the Dollar’s growth momentum starts about six months before the Fed’s policy tightening cycle begins and ends six months after the tightening. The starting point in the policy reversal was a change in the QE, not a rate hike as before when such a tool became common.

However, to speak of an unambiguous and prolonged failure of the Dollar is prevented by the Fed and the stronger initial stance of the US economy.

The Fed has much more room to tighten policy than energy-hit Europe or commodity-exporting countries at risk of falling incomes, considering months of declining prices for their export.

Fed officials, including some of the most dovish, continue to reassure the market that policy easing is not expected in a year and that the cycle of hikes is far from over.

If we are right and the Dollar continues to retreat from recent highs, the next significant area to look out for is 103.7 – the March 2020 peak and the end of the correction in June. If dollar bulls do not return to buying, the road to 100-101 will also open next. 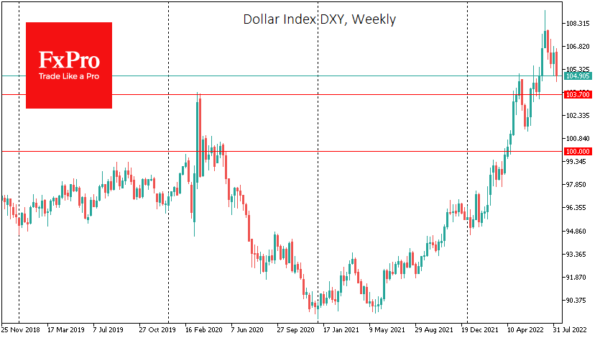