EURAUD came under selling interest yesterday, after hitting resistance at the 200 – period exponential moving average (EMA), fractionally above the 1.4705 barrier, and slightly below the downside line drawn from the July 11 high. Although this keeps the prevailing downtrend intact, in the current session, the pair consolidated near the important support zone of 1.4565.

The cautiously negative outlook is also supported by both our oscillators. The RSI moved lower but stopped and flattened near its equilibrium 50 line, while the MACD, even though it lies below its trigger line and points south, has yet to obtain a negative sign. These technical indications imply that the pair has not started to gather pure negative speed yet.

A break below 1.4565 would confirm a lower low on the 4-hour chart and may initially pave the way towards the 1.4430 barrier, which is the low of August 16, or the 1.4393 hurdle, marked by Monday’s low. If that zone is not able to withstand the pressure either, then the fall may get extended towards the 1.4315 territory, defined as a support by the low of April 5.

The outlook could brighten upon a strong recovery above the aforementioned downtrend line. In this case, EURAUD would already be above the 200-EMA and the 1.4705 barrier and thus, the bulls may get encouraged to climb to the peak of August 2 at 1.4805. Should they breach that resistance as well, they could shoot for the 1.4910 zone, which acted as a temporary ceiling between July 13 and 21.

To recap, EURAUD remains below a downtrend line taken from the high of July 11, but the bears are struggling to overcome the key support of 1.4565. A break below that zone may be the invitation sidelined bears are waiting for. 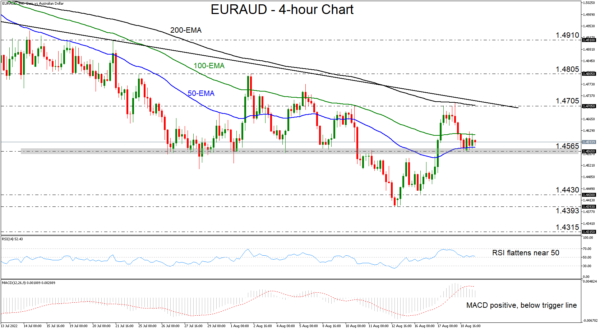