EURGBP started the week on the back foot after securing seven consecutive green weeks, with the price gradually retreating from Monday’s 19-month high of 0.8788.

The 0.8720 level, which switched from resistance to support on Tuesday, is currently under examination on the downside, along with the steep tentative ascending trendline. Should the bears breach that base, selling pressures could intensify towards the 0.8679 bar. Slightly lower, the 20-day simple moving average (SMA) at 0.8645 may cancel any extensions towards the intra-swing low of 0.8565.

According to the momentum indicators, the market is looking overbought and further deterioration is possible as the RSI has slipped back below 70 after hitting a wall near May’s ceiling for the third consecutive time. Meanwhile, the stochastics have posted a bearish cross above their 80 level, while the MACD, although above its red signal line, is showing some signs of weakness as well.

Nevertheless, if buyers defend the pair above 0.8720, the price may attempt to surpass the 0.8788 top and run towards the key 0.8860 constraining zone, which has been a strong barrier to upside and downside moves during April 2020 – January 2021. A decisive close above it may prompt an exciting rally up to the 0.8925 number, last active in January 2021.

Summarizing, EURGBP seems to have reached overbought conditions, backing the current selling forces in the market. However, hopes for an upturn will remain in place as long as the 0.8720 floor stands firm. 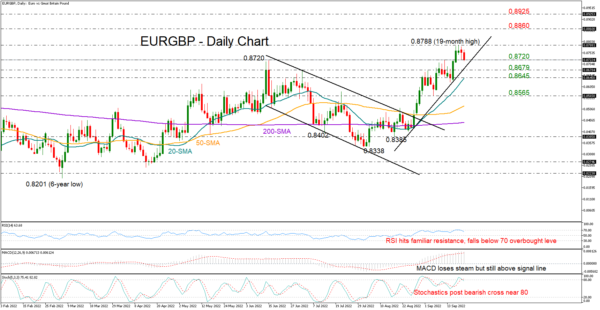