Will Silver Erase its Wednesday Rebound?

Silver jumped on Wednesday after triggering some buy orders near the 17.95 zone. However, the spike up was stopped by the 18.95 level, slightly above the 50-period exponential moving average (EMA) and near the 100-EMA. This prints a lower high on the daily chart and combined with the fact that the 200-EMA is also hovering above the price action, it suggests that another round of selling could be looming.

The RSI slid back below 50, while the Stochastic exited its above-80 zone. On top of that, its %K line lies below the %D, with both pointing down. This means that the white metal may have started gathering negative speed again, which supports the notion for renewed declines.

If the bears take the driver’s seat again, they may go for another test near the 17.95 zone and should they breach it, a test at the low of September 1 at 17.55 could be possible. If that zone is not able to attract buyers either, its break would lead the price to territories last seen in June 2020. The next area that could play the role of a support level may be the low of that month at around 16.90.

The bearish case could be discarded upon a break above 19.25, marked by the inside swing low of September 22, but the bulls might claim full control after they overcome the round number of 20.00, marked by the high of September 12. This would confirm a higher high on the daily chart and may see scope for bullish extensions towards the peak of August 15 at 20.85.

Putting everything together, despite silver’s recovery yesterday, the outlook remains gloomy, with the bears having the potential to retake charge and attempt breaking more support zones. 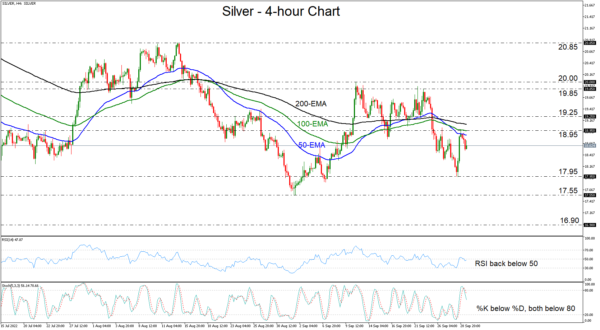