EURUSD posted almost 4% of gains after the bounce off the 20-year low of 0.9530 in the preceding week, remaining within the long-term downward sloping channel.

Technically, the RSI indicator is pointing upwards in the bearish region, while the MACD is trying to strengthen its bullish bias in the negative area, suggesting that the next near-term movements could be to the upside.

Currently, the price is approaching the 20-day simple moving average (SMA), which is standing slightly above the 0.9863 resistance, while more gains could open the way for the parity level and the 50-day SMA at 1.0020. Running higher, a break of the descending channel could add some optimism for bullish actions until the 1.0200 barrier.

Summarizing, EURUSD has been in a bullish movement in the very short-term; however, the bigger picture remains strongly bearish. 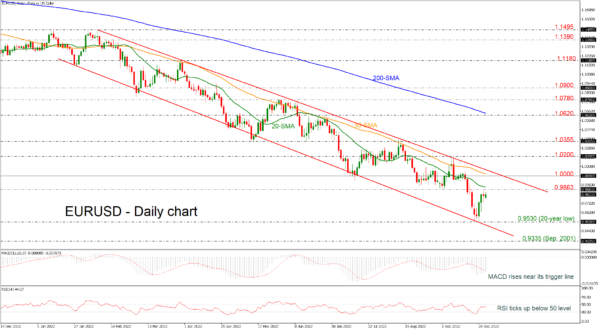