The USDJPY is standing at the front foot in early Monday and probed again through 145 barrier, following last week’s bullish close (the seventh straight weekly gains) and monthly advance of 4.1% in September that marked the second consecutive strong monthly rally.

Near-term action moved to the upper side of three-week range, after bulls hit new 24-year high (145.90) but were strongly rejected there, with subsequent pullback finding firm ground just above psychological 140 support (also Fibo 38.2% of 130.39/145.90 rally), with dip being contained by rising daily Kijun-sen.

The dollar remains firm, supported by strong fundamentals (hawkish Fed / safe-haven flows) and expected to attack again the new peak, violation of which would signal bullish continuation and expose 1998 top at 147.68.

Although technical studies on daily chart are overall bullish, weakening bullish momentum and overbought stochastic warn that the action may hold in extended consolidation before bulls resume.

Extended dips should find a solid support at daily Tenkan-sen (143.12) to keep dip-buying strategy in play. 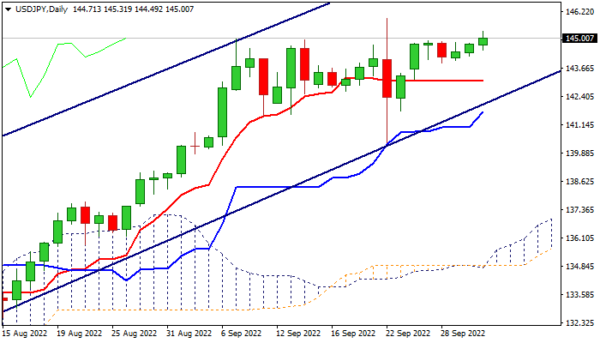