Gold drifted lower and back into the broken 2022 bearish channel after its two-day exciting rally stalled at 1,729 – the highest since September 13.

The RSI and the stochastics have abandoned the overbought region, raising concerns that the latest bullish wave has probably peaked. The weakness in the MACD is also endorsing the current negative momentum in the price.

Nevertheless, sellers would not be ruining the short-term positive trajectory unless they drive forcefully below the 200-period simple moving average (SMA) and the bullish channel at 1,698. The 20-period SMA is also converging on that area. In case the decline officially violates the upward pattern below the 38.2% Fibonacci of 1,688, the price may seek shelter around the former resistance of 1,676. If it fails to rebound here, the 50-period SMA, which coincides with the 23.6% Fibonacci retracement of the 1,807–1,614 downtrend, could next come to the rescue at 1,660.

In the bullish scenario, where the precious metal bounces back above the 50% Fibonacci of 1,711, the bulls may attempt to reach the cautious zone of 1,735–1,746. A decisive close higher could confirm additional gains towards 1,765.

To summarize, gold traders are engaging in profit-taking after a strong rally earlier this week, but the market 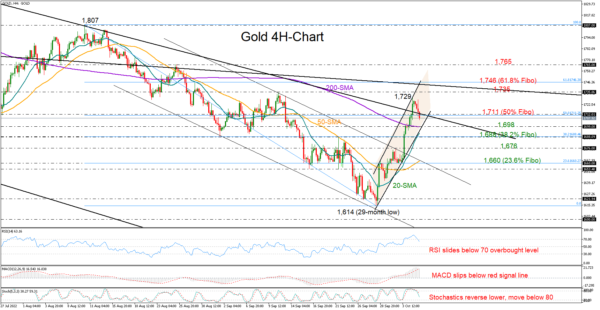