WTI oil futures (December delivery) closed strongly up by 4.0% on Wednesday at 88.26 after four consecutive days of muted trade, raising speculation that the upturn could gain extra legs in the near term.

Previously, the price stepped on the broken descending trendline to defend the rebound off the nine-month low of 76.25.

In momentum indicators, the RSI has climbed back above its 50 neutral mark and the stochastics keep sloping upwards, reflecting a bullish bias. Yet, the latter is already near its 80 overbought mark, whereas the MACD has barely entered the positive area, both warranting some caution.

Besides, with the 88.42 resistance standing firm, downside corrections cannot be ruled out. If the bulls breach that wall, the price may speed up to test October’s high of 92.32. Above that, the focus will turn to the 200-day simple moving average (SMA) at 97.40, a break of which is needed to clear the way up to the 100.50-101.50 constraining zone.

Alternatively, the price may again seek support within the 85.00 – 82.65 region. Failure to pivot here could bring the descending trendline under examination around 80.00. Even lower, the bears will attempt to re-activate the downtrend below 76.25 with scope to reach the 72.72 barrier from 2021.

In brief, the latest bullish move in WTI oil futures has increased the odds for a continuation higher, though traders will wisely wait for an extension above the 88.42 bar before they increase their buying orders. 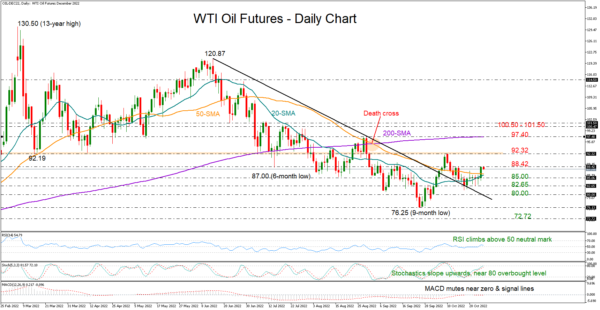