Gold About to Turn Up But Needs Confirmation from Fed

Gold retreated to $1633 by the start of this month, close to the lows of September and October, but gained about 1% surpassing $1650. We saw a similar buying spree the month before, and such buying activity looks like a reversal to the upside. However, in the current circumstances, it is better to wait for the price to surpass $1700, confirming a bullish reversal.

While central banks are signalling one after the other that they are decelerating their rate hikes, gold is enjoying ‘buying the dip’ behaviour, as some investors see the current prices at the bear market’s edge (-20% of the peak) as attractive for buying in the mid-to-long term. 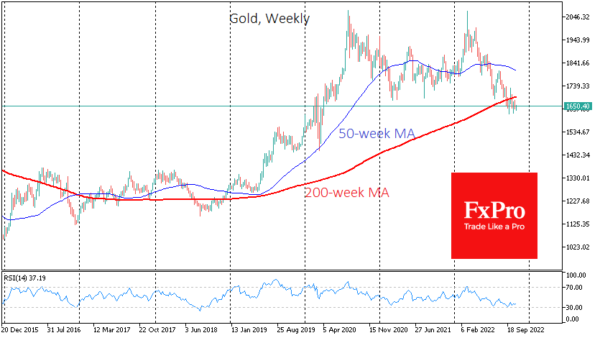 On the weekly charts, gold trades below its 200-week average, which is often a bearish sign. But experienced traders must have noticed that in 2016 and 2018, the price reached a local bottom about five weeks after falling below that line, just like now.

However, this is a case where waiting seems like a prudent tactic. On the technical analysis side, it is more sensible for medium-term buyers to wait for the price to return to the area above the 200-week average, surpassing $1700. 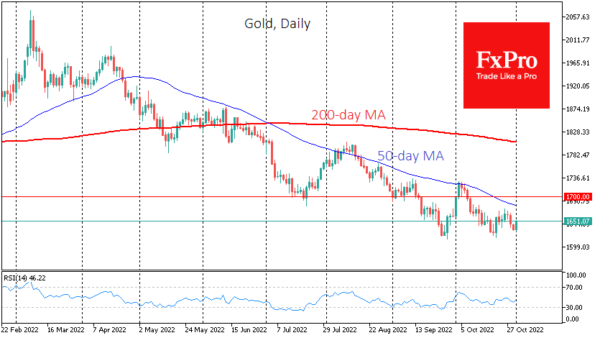 Also, long-term buyers of gold would be better off waiting for official signals from the Fed that it will lower the pace of rate hikes. Despite the reparations by the speakers and the media to soften the call, there is still a risk that it will not happen this coming Wednesday, as the Fed has already surprised many times with its hawkishness over the summer months.

Notwithstanding the risks noted above, in our view, the prevailing scenario is still a reversal in gold following a change in the degree of rhetoric. A similar reversal but in a different direction was in March 2022, when the Fed started to “surprise” the markets with increasingly hawkish rhetoric.