USDJPY recently bounced off the 200-day simple moving average (SMA) after the fall towards the three-and-half-month low of 133.55. The price is trying to create a bullish correction as in the short-term timeframe the bias is bearish.

Technically, the MACD is gaining some momentum above its trigger line in the negative region, while the RSI is sloping slightly upwards to confirm the recent upside movement. However, the 20- and 40-day SMAs are still moving down, approaching the current market price.

Should the price move up, the 20-day SMA at 138.75, which the bears were unable to break the last month, could provide immediate resistance. Moving higher, the focus will shift to the 143.45-145.00 area, which encapsulates the 50-day SMA.

In the alternative scenario, traders would eagerly be looking for a break lower, meeting the 200-day SMA at 135.00. If that’s the case, the rally could last until the 133.55 barrier, ahead of the 130.37-131.35 support zone, confirming the near-term bearish outlook.

Summarizing, USDJPY has been negative over the last one-and-a-half-months despite the latest upside movement. Any moves beneath the 200-day SMA may change the broader outlook to bearish as well. 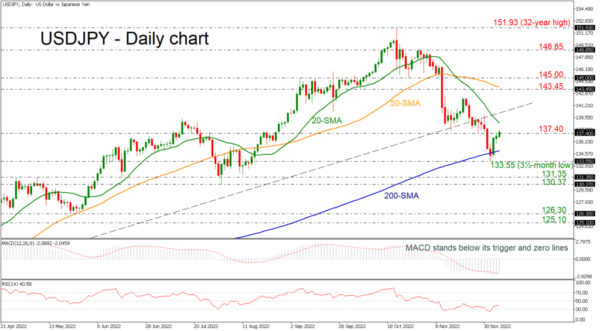