Dollar Index: Dollar Remains at the Back Foot on Renewed Recession Fears, Fed in Focus

The dollar index holds in red for the third day and threatening to fully retrace recovery leg from 104.05 (Dec 5 low, the lowest in 3 –1/2 months) after bulls were trapped above 200DMA.

The dollar came under pressure on renewed concerns about slowdown of US economy, after jobless claims rose, adding to worries that the economy may slide into recession in 2023.

Traders also focus on next week’s Fed policy meetings, which is expected to provide more clues about the central bank’s next steps, after signals of slowing the pace of tightening, with wide expectations of 50 basis points hike next Wednesday, following four consecutive 75 basis points hikes.

This could be an initial positive signal, as inverted hammer, reversal pattern is forming on weekly chart, however, this scenario needs stronger signals to be validated and looks quite unlikely for now, though it should be considered.

Upticks should stay capped by falling 10DMA (105.36) to keep bears intact for final push towards key support at 104.05, loss of which would signal bearish continuation. Only firm break above pivotal 200DMA barrier would sideline bears. 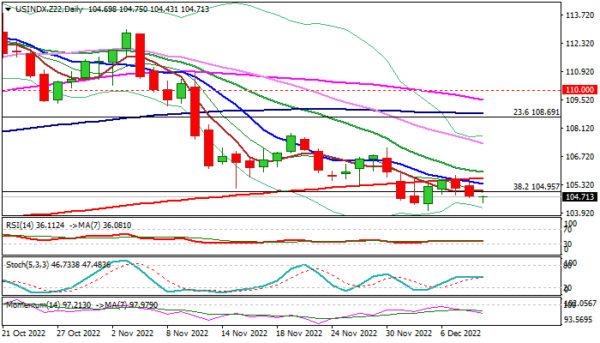