The Swiss National Bank (SNB) holds its final meeting for 2022 on Thursday, December 15. The current market pricing points to a 50bps rate hike. Will this hike be enough to turn the tide around for the swissie against the euro or developments elsewhere could be more impactful?

The September meeting did not appease the market

The SNB holds its fourth and final rate-setting meeting for 2022, joining the chorus of rate meetings from other major central banks this week. It has been some time since the last meeting on September 22 when the SNB announced the return to a positive policy rate. The 75-bps rate hike was in line with expectations and failed to inspire the markets. In addition, the post-meeting press conference’s message was slightly dovish as Chairman Jordan did not appear overly enthusiastic about further rate hikes.

Recent data somewhat stronger than in other regions

The Swiss economy appears to be in better shape than its main trading partners. While at 3.0%, the year-on-year CPI remains above the SNB’s comfort zone, it is clearly lower than the double-digit increases seen not far from the Swiss borders. Similarly, the manufacturing PMI stands comfortably above the 50-expansion level. But the domestic economy cannot come out completely unscathed by the economic hardship seen elsewhere, as consumer sentiment in the fourth-quarter dropped to record low levels, and annual growth in retail sales continues to hover around zero. Hence, consumer spending appears to be affected even though the electricity market in Switzerland remains highly regulated for small consumers and households. 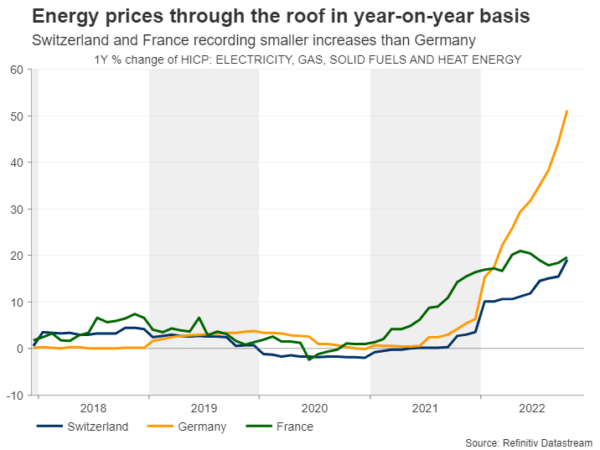 Swissie under pressure against the euro lately

The escape from negative rates did not prove beneficial for swissie as the market had already turned its focus elsewhere. The swissie has enjoyed a steady bid against the euro over the past few years reaching a multi-decade high of 0.94 per euro on September 26, on the back of the elevated inflation rates across Europe and the increased chances of recession in both the euro area and US matter in 2023. SNB’s preference for a stronger currency at this juncture is not concealed, as it is one of the reasons for the lower inflation rates recorded in Switzerland. Hence, the fourth-quarter rally in the euro/swissie pair should have raised some eyebrows at the SNB head offices.

Could the SNB be more aggressive at this meeting?

The SNB has been a laggard among the major central banks in the current rate hiking cycle. Contrary to the ECB’s 200bps rate increase, the SNB has raised rates by just 125bps in 2022. With both the Fed and ECB expected to hike again this week by 50bps respectively, the onus is on the SNB to make its next move. The market currently assigns a 77% probability for a 50bps rate hike, with the remaining 23% looking for a quarter-point rate move. There will be the usual interest on the ensuing press conference and the conditional inflation bank forecasts. However, two days before the meeting we will get the SECO forecasts. These forecasts, which tend to be in line with, albeit a bit more conservative than the SNB’s forecasts, thus limiting the surprise element on the meeting day.

If the SNB wishes to appear determined about keeping the swissie strong, and thus offsetting the potentially higher imported inflation, the door is open for a stronger move of 75bps and a hawkish showing at the press conference. Otherwise, a 50bps rate hike would mostly appease the market and allow the SNB to use its FX reserves to manage unwanted moves in the euro/swissie pair. Additionally, if the bleak forecasts for a 2023 recession in the euro area get confirmed or there is another energy-related episode, the SNB could just wait on the sidelines. The swissie would most likely enjoy another safe-haven inflow without the need for aggressive hikes from the SNB.

Should the SNB meeting hold no surprises, euro/swissie should look for guidance at the ECB meeting later on Thursday. Should the swissie bulls attempt to control the market, their primary aim would be the 100-day simple moving average at 0.9746 followed by the 0.9665 area. On the other hand, another attempt from swissie bears to recover part of the ground lost during 2022, means that the busy 0.9958-75 area should be tested first. 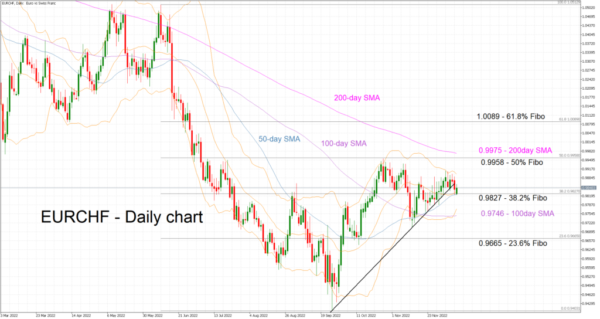