GBPJPY Bounces Off Uptrend Line But Momentum is Weak

GBPJPY rebounded off the long-term ascending trend line and near the three-month low of 155.30. The price is currently trying to surpass the 20-day simple moving average (SMA) and the technical oscillators are confirming an upside movement. The RSI is ticking marginally up in the negative territory, while the MACD is surpassing its trigger line below the zero level.

Should GBPJPY make another run higher, it’s likely to meet resistance at 161.20 as this level has strongly capped prices since late December. A successful break above this key resistance area would open the way for the death cross between the 50- and the 200-day SMAs around 162.95. Above that, the pair needs to overcome another handle at 164.00.

If the soft positive momentum fails to hold and prices turn lower, the ascending trend line at 156.70 is the nearest support that could halt steeper declines. A potentially more important support, though, is the three-month trough of 155.30. If breached, it would shift the focus to the downside and prices would slip towards the 152.60 support.

In the bigger picture, GBPJPY would need to make a sustained climb above the bearish crossover in order for the short-term outlook to become convincingly bullish. 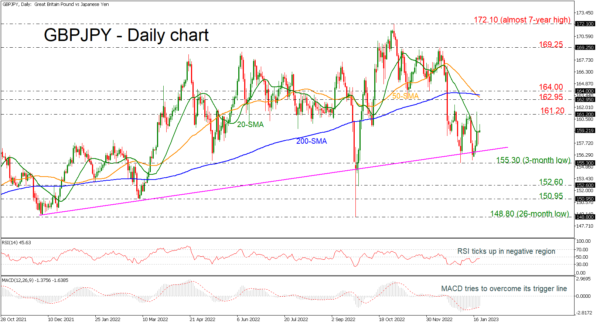