EURUSD has reversed down following an aggressive bearish week, which shifted the medium-term positive outlook to negative. The price penetrated the ascending trend line to the downside and recorded a fresh more than three-month low of 1.2054, achieved last Friday. However, the technical indicators are suggesting a retracement of the sharp sell-off.

In the daily timeframe, the RSI indicator is holding in the negative territory, while it is sloping slightly to the upside. Moreover, the %K line of the stochastic oscillator created a bullish crossover with the % D line in negative zone, signaling a bullish correction in price action.

In the event of an upside reversal, the immediate resistance level of 1.2160 could act as a barrier before being able to re-challenge the 1.2220 level. A break above this region would shift the medium-term outlook to a more bullish one again as it would take the pair near the 20- and 40-simple moving averages at 1.2273 and 1.2300 respectively. Further gains would lead the way towards the 1.2410 resistance hurdle.

Further losses should see the December 2017 high of 1.1900 acting as a major support. A drop below this area would reinforce the bearish structure in the medium-term and open the way towards the next key support level of 1.1720. 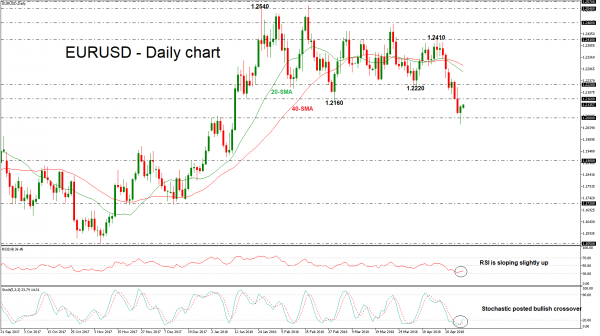 EUR/GBP Remains In Downtrend Below 0.8400