The Turkish lira hit new record low at 4.3741 against US dollar on Wednesday, in fresh extension after decision of US President Trump to pull the US from international nuclear deal with Iran boosted dollar. Gains proved to be short lived as lira subsequently bounced on comments that Turkish President Erdogan would discuss about the currency with his economy team which raised hopes for an extraordinary tightening action from the central bank. The unscheduled meeting of Erdogan and the economic team is due today and may result in some new and unexpected steps from the central bank, which was so far unable to deal with double-digit inflation. Turkish lira bounced around ten figures in immediate reaction on the news and currently trading around 4.28 handle. Daily techs also started to generate bearish signals on RSI / slow stochastic reversal from overbought territory and momentum turned south after peaking earlier today. Technical signals need to be confirmed by the action of the central bank, or at least signals that the CBRT is on track to do some changes and stop recent sharp fall of lira. Extension and close below 4.2424 (Fibo 38.2% of 4.0294/4.3741 upleg) is needed to signal reversal and put bulls on hold. Stronger recovery could be signaled on lira’s rally through rising 10SMA (4.1748). Conversely, mild reaction from the central bank would risk fresh weakness of Turkish lira. 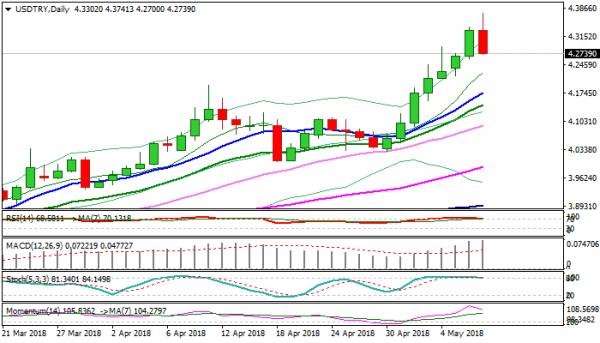