The Fed could make a number of changes in the upcoming June FOMC meeting, to pave way for a rate cut in as soon as July. We would focus on three things: updated economic projections, adjustment in the forward guidance and median dot plot. It is likely that the Fed would leave the policy rate unchanged at 2.25-2.50% this week. Yet, dovish changes in the above-mentioned three items would pave the way for a return of the monetary easing policy.

The Fed’s dual mandates are to maximize sustainable employment and to maintain price stability with a +2% inflation target. On the job market, nonfarm payrolls increased +75K in May, missing consensus of +185K and April’s addition of +224K. The unemployment rate stayed at decades’ low of 3.6% and the participation rate also stayed at 62.8%. Wage growth eased to +3.1% y/y, from +3.2% in April.

Meanwhile, the second estimate GDP growth was revised lower to +3.1% q/q saar in 1Q19, compared with the initial reading of +3.2%. Although consumer confidence suggests that spending has remained firm, we expect growth to slow in the second quarter. 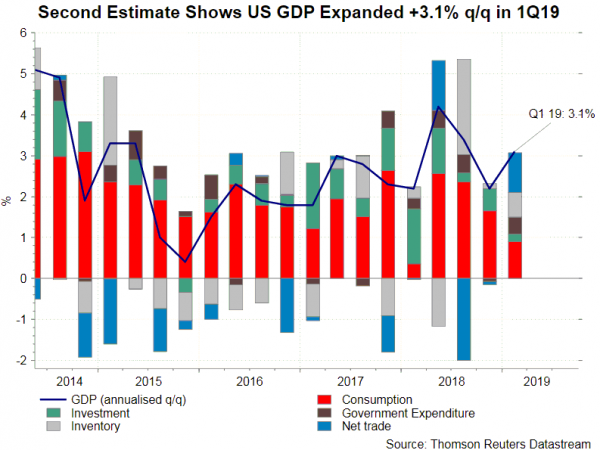 Against the backdrop, the members should revise lower the economic projections to reflect weaker inflation and probably a less resilient growth outlook.

Given the moderation in US economic data and expectations of further deterioration, it is likely that the Fed would amend its forward guidance. Over the past months, the Fed had reiterated that “the Committee will be patient as it determines what future adjustments to the target range for the federal funds rate may be appropriate to support these outcomes”. In June, we expect the members might remove the term “patient” and note that any action would very much depend on incoming data. This could help pave the way for rate cut later in the year.

Although the market overwhelmingly expects that the Fed would keep its powder dry in June, rate cut(s) would happen, almost certainly this year. The question is to what extent. The 30-day Fed funds futures shows that that there is 83% chance of a rate cut in July and 87% chance that the Fed would lower the policy rate by at least twice this year. More Fed members should have turned more dovish this month than in March. Their views would be reflected in the latest median dot plot. In March, the median dot plot projected no rate adjustment this year, followed by one rate hike in 2020. Depending how dovish the Fed’s message is, we expect the latest median would at least show no change in the policy rate in 2020.