At the time of writing, EUR/NZD is the biggest loser for today. Just an hour or two ago, it should be GBP/NZD. But thanks to the current recovery, GBP/NZD is relegated to the second place.

Nevertheless, EUR/NZD does give us an interesting picture to study.

It’s clear that 1.7928 is a medium term top. Firstly, the up trend from 1.4534 has completed a five-wave sequence. Secondly, bearish divergence conditions are seen in both daily and weekly MACD. EUR/NZD is now approaching a key support zone between 1.6569 and 38.2% retracement of 1.4534 to 1.7928 at 1.6631. Could this cluster support zone hold? Based on current momentum, it’s rather hard to say. 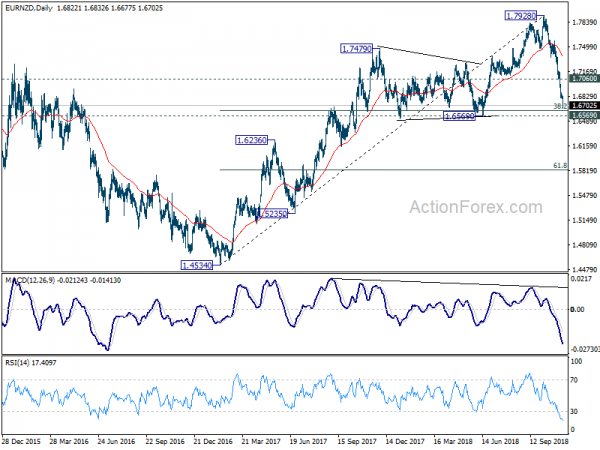 Instead of predicting whether 1.6569/6631 would hold, we’ll look at the implication of break or hold instead. Strong rebound from 1.6569/6631 and break of 1.7060 minor resistance will indicate completion of the decline 1.7928. More improtantly, with the end of wave four at 1.6569 defended, it will suggest that price actions from 1.7928 are merely forming a corrective pattern. That is, EUR/NZD is still in a medium to long term up trend and break of 1.7928 should be seen afterwards. 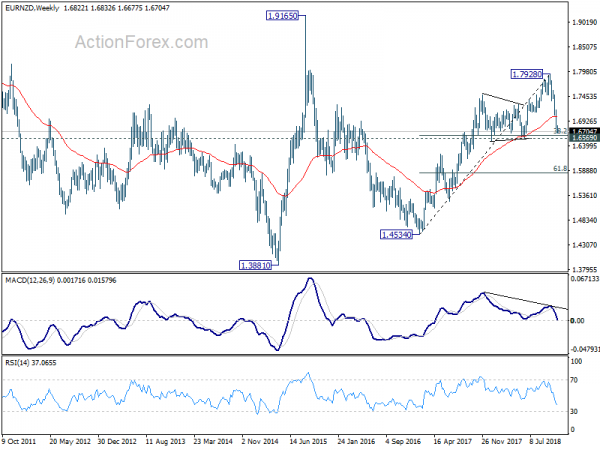 Fundamentally, the latter bearish case got its arguements too. Markets were rather bearish on New Zealand Dollar due to dovish RBNZ outlook. RBNZ has just reiterated last week that it expected to keep OCR unchanged at 1.75% “through 2019 and into 2020”. And, the next move could both be a hike or cut.

However, it should also be reminded that New Zealand just posted last week a stellar Q3 job data, which saw unemployment rate dropped to decade low. The data has already had some positive impact on Kiwi. Should improvement in employment and inflation persist, markets would continue to pare back bet on RBNZ cut or even turn to bet on a hike. And if situation in Eurozone worsen, ECB might keep interest unchanged even after summer of 2019. Flips in sentments on both sides could indeed set up a free fall in EUR/NZD back to 1.38/45.

Well, admittedly, it’s really too far-fetched for now. But it would be an interesting pair to watch in the coming months.