Hong Kong stocks lead Asian markets generally higher in reaction to the results of Sunday’s district council elections. While the district councils have few real powers, the elections are seen as a referendum on the current unrest, and a confidence vote on the government.

The elections results should put extra pressure on the Chinese and Hong Kong government to answer the five demands of the protesters. The government will have “no excuse” not to appoint a commission of inquiry on all that happened regarding the extradition bill, including police brutality. Such development would offer some hope for ending the near six month unrest in the city.

The Hong Kong HSI gaps up in Monday’s trading and is currently up 1.76%. Despite the rebound, there is no change in the overall technical outlook. Corrective rise from 24889.93 should have completed at 27894.68. Hence, another decline is still in favor. Break of 26203.97 support will affirm this bearish case and target a test on 24889.93 low next. 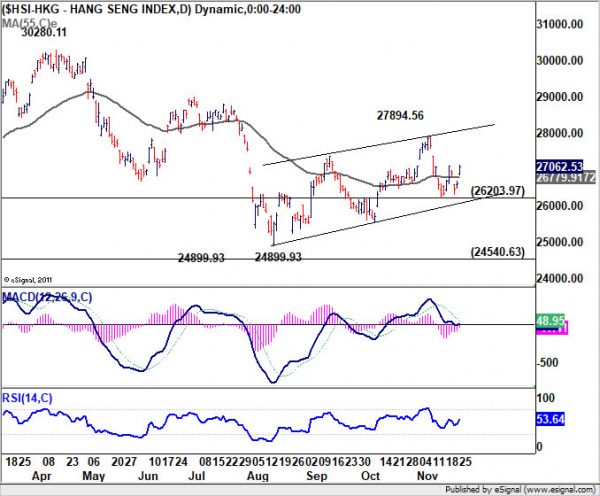