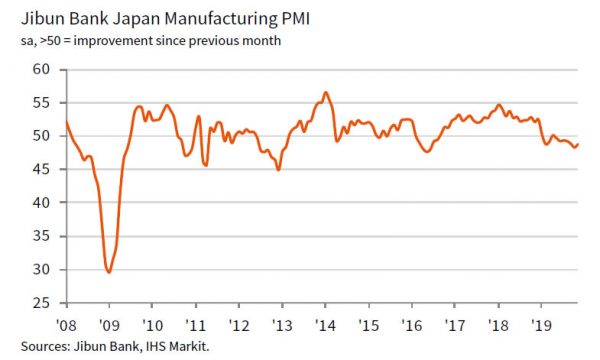 “Japan’s manufacturing sector remains firmly stuck in contraction, with the same issues which have plagued the industrial world once again hitting firms where it hurts. In particular, export orders dropped at the fastest rate since mid-year amid reports of demand weakness at key trade destinations, namely China.

“At the sub-sectors, it was intermediate and investment goods which were the primary sources of economic decline, whereas consumer goods makers observed improvements in business conditions.

“Signs of how deeply-rooted this manufacturing downturn in Japan has become were seen in other survey data. Price discounting has been a trend in each of the past six months, highlighting that firms are now actively trying to tackle the sluggish demand conditions. Inventories of inputs also fell at a sharp rate, suggesting that firms are not expecting output requirements to rise anytime soon.”

Yen Reverses Its Losses In The Morning Session