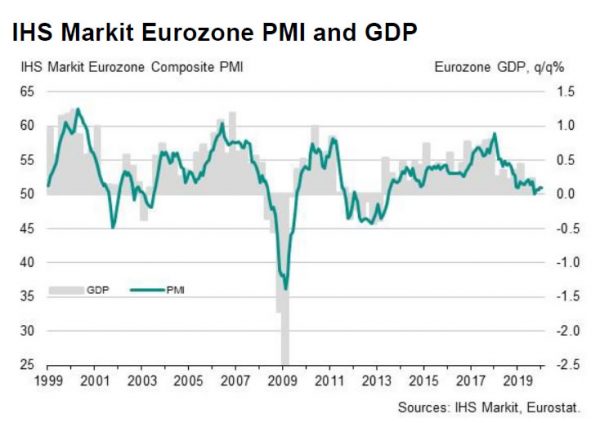 “While the year may have changed, the performance of the eurozone economy was a familiar one in January. Output growth was unchanged from the modest pace seen in December, signalling that the economy failed again to record a pick-up in growth momentum.

“The failure of growth to accelerate was in spite of some areas of positivity. The service sector remained in expansion, while the worst of the manufacturing downturn looks to have passed and industry appears to be moving towards stabilisation. France and Germany continued to grow, while business confidence across the single-currency area jumped to a 16-month high.

“On the other hand, weakness was evident outside the ‘big-2’, with new orders unchanged and growth of business activity slowing to near-stagnation.

“Overall, a stable picture for both growth and inflation will likely reassure the European Central Bank that they are safe to keep monetary policy fixed for now while carrying out a strategy review.”