UK PMI Manufacturing was finalized at 53.3 in July, up from 50.1 in June. That’s also the highest level in 16 months. Markit noted that domestic new orders rise but new exports business falls. but business sentiment still rises to 28-month high. 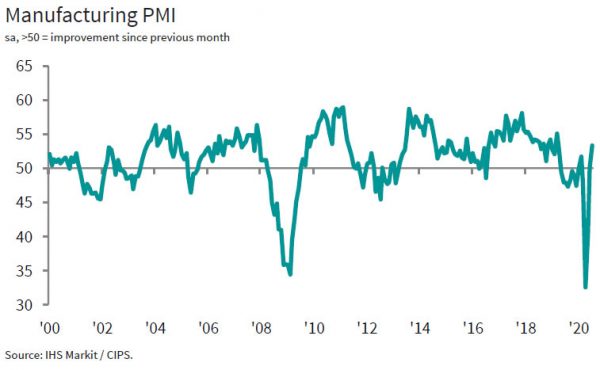 Rob Dobson, Director at IHS Markit: “The UK manufacturing sector started the third quarter on a much firmer footing, with output growth hitting a near three-year high and new orders rising for the first time in five months. The recovery strengthened as a loosening of lockdown restrictions allowed manufacturers to restart or raise production. July also saw signs of furloughed employees returning to work and customers resuming spending. Business optimism also rose to its highest for over two years as companies grew more hopeful that the future has brightened.

“Despite the solid start to the recovery, the road left to travel remains long and precarious. An extended period of growth is still needed to fully recoup the ground lost in recent months. This is also the case for the labour market, where job losses are continuing despite businesses reopening. There is a significant risk of further redundancies and of furloughed workers not returning unless demand and confidence stage more substantial and long-lasting rebounds in the months ahead.”