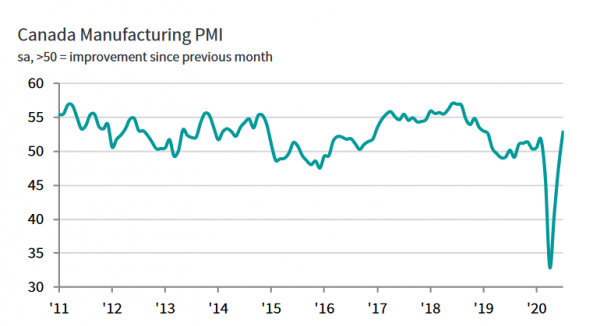 “July data highlights a partial rebound in the Canadian manufacturing sector after the steep downturn seen during the second quarter of 2020. Production volumes expanded at the fastest pace for nearly two years, helped by a tentative recovery in manufacturing sales as customers restarted spending amid an easing of COVID-19 restrictions. A slight increase in employment numbers was also a positive signal that manufacturing companies expect to continue expanding their production schedules in the coming months.

“It was not all good news in July, however, as export sales continued to slide and business expectations slipped back from June’s four-month high. Reports from survey respondents suggested that concerns about the global economic outlook and a second wave of the pandemic had curtailed growth projections for some manufacturers in the latest survey period.”