Action Forex
HomeLive CommentsBitcoin finished near term decline, heading back to 44k and then 52k

Bitcoin finished near term decline, heading back to 44k and then 52k

In a consultation paper, Basel Committee on Banking Supervision said that “while the cryptoasset market remains small relative to the size of the global financial system, and banks’ exposures to cryptoassets are currently limited, its absolute size is meaningful and there continues to be rapid developments, with increased attention from a broad range of stakeholders.” And, “cryptoassets have given rise to a range of concerns including consumer protection, money laundering and terrorist financing, and their carbon footprint.

It proposed that a “group 1” cryptoassets, like stablecoins, would be assigned a smaller risk weighting in line with stocks. On the other hand, a “group 2” crypto assets like bitcoin would be assigned a risk weight of 1250%. That is, banks will have to hold capital at least equal in value to their group 2 exposures. “The capital will be sufficient to absorb a full write-off of the cryptoasset exposures without exposing depositors and other senior creditors of the banks to a loss,” it added.

Bitcoin is having a notable rebound in the past two days. The development now argues that the near term decline from 64828 might have completed with a failure fifth wave at 31073 already. Immediate focus is now on 39481 resistance. Break there will affirm our view. Bitcoin should then target 38.2% retracement of 64828 to 31073 at 43967 at least. There is also enough prospect for further rise to 61.8% retracement at 51933 indeed. 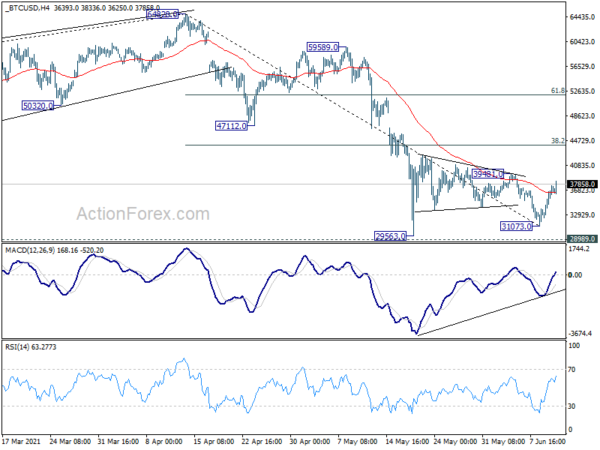 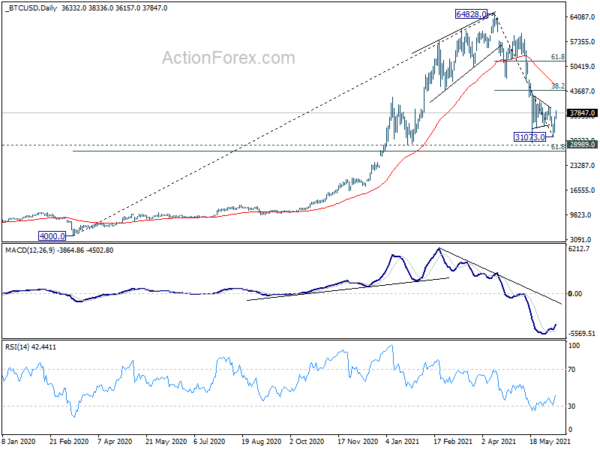